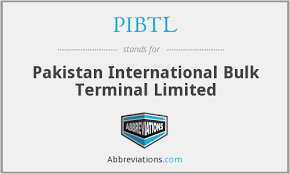 KARACHI: The Board of Directors of Pakistan International Bulk Terminal Limited (PIBTL) was held Wednesday at the Terminal Office of the company. The meeting adjourned after the end of market hours and thereby the result was announced on Friday (today).

Profit before tax (PBT) clocked in at Rs 1.107 billion for the period, following a 174.05 percent change YoY. The company incurred a loss before tax of Rs 1.495 billion last year over the same period. Similarly, the PIBTL experienced a 159.08 percent YoY change in profit after tax (PAT) bringing losses of Rs 1.463 billion to a gain of Rs 864.7 million.

At a capacity utilisation of 71 percent, the company made a whopping 156.47 percent increase in its earnings per share by bringing it up to Rs. 0.480 from losses per share of Rs. 0.850 over the same period last year.

While costs of services increased by 32.67 percent and taxation costs increased by 856.46 percent; the business however was able to move its performance from negative territory towards positive.

This could be attributed to the 42.12 percent increase in revenue for the half-year ended December 31, 2019 along with a 32.71 percent rise in other income and 33.37 percent decline in financial cost. In addition, the company had been able to turn exchange losses of Rs 1.126 billion incurred last year over the same period into a gain of Rs. 420 million, thus signifying a change of 113.38 percent YoY.

The relative success of PIBTL is due to a robust demand for coal from the power and cement sector in addition to stable exchange rate. In addition, Pakistan Railways is likely to construct a railway track to tie-up PIBTL’s terminal with the railway network, subject to approval of the Planning Commission. This will enable the company to boost terminal utilisation for cement and coal handling.

Having commenced commercial operations from July 2017, the company entered into a Build Operate Transfer (BOT) contract with Port Qasim Authority (PQA) on November 06, 2010 for the exclusive construction, development, operations and management of a coal and clinker and cement terminal at Port Muhammad Bin Qasim for a period of 30 years.

The Board of Directors has not announced any cash dividend for the half-year ended December 31, 2019 and has not declared any cash payout in the last five years.