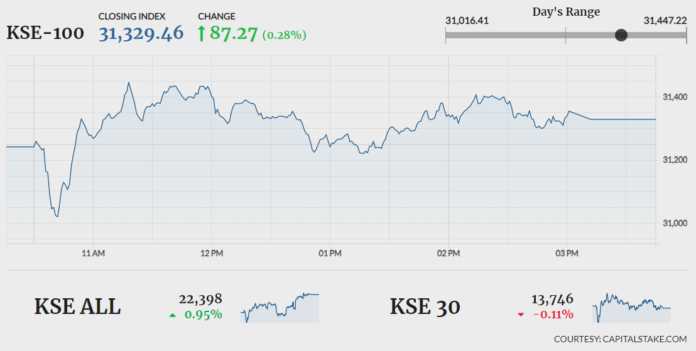 KARACHI: Indices of the Pakistan Stock Exchange (PSX) traded within a narrow range on Thursday, with the benchmark KSE-100 Index closing in the green despite accumulating losses in early trade.

“The auction of Pakistan Investment Bonds (PIBs) which resulted in normalization of yield curve, gave good reasons to investors to come back to equities,” said an analyst at Arif Habib Ltd. “However, weakening oil fundamentals kept the investors in limbo on whether to book profit or take new positions.”

Meanwhile, Sazgar Engineering Works Limited (SAZEW -1.44pc) announced its financial performance for the third quarter of FY20. The company’s revenue slipped 0.48pc YoY, while gross profit increased by 6.57pc. Its cumulative earnings per share fell from Rs3.09 last year to Rs1.88 during the period under review.

Also, Lotte Chemical Pakistan Limited (LOTCHEM -3.93pc) released its financial results for the first quarter of FY20. The company’s revenue declined by 27pc to Rs11.71 billion, which resulted in a gross loss of Rs113.08 million. The company’s EPS fell from Rs0.85 last year to Rs0.04.