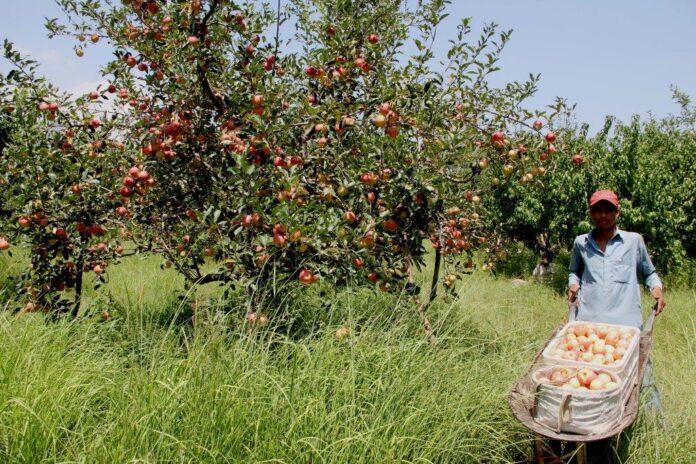 PESHAWAR:  The farmers of Swat Valley have recently suffered heavy losses after hailstorm and downpour battered the valley decimating orchards and standing crops.

They say the damage is enormous and widespread as 80 per cent of peach, plum, persimmon, apple and pear orchards on more than 35,000 acres in the valley have affected.

On the one hand, the Swat district, whose major source is agriculture and tourism, has been hit by heavy rain and hailstorm this year, but on the other the tourism industry is already shattered by the coronavirus pandemic.

Cultivators say in addition to their financial woes there will also be a shortage of fruits in Peshawar, Islamabad, Lahore and Karachi and other cities of the country. Fruits will have to be imported that will result in the increase of its prices, they add.

The farmers have demanded Khyber Pakhtunkhwa Chief Minister Mahmood Khan, who also belongs to an agriculture family in Swat district, to immediately visit his home district and announce a financial package for farmers.

Fazal-e-Maola Zahid, an agriculture expert from Swat, told Pakistan Today that thousands of acres of orchards in Kokari, Shamozai, Amlok Dara, Barikot in Lower Swat, Matta Tehsil in Upper Swat, Charbagh and Khawaja Khel had been hit by fierce weather conditions during the last few days.

He said more than 50,000 families depended on these orchards, adding besides orchards, standing wheat crop on 100,000 acres in Swat district has also been damaged which was almost ready for harvesting within the next four weeks.

Officials of the Kokari Farmers’ Board also demanded the provincial government to immediately compensate the calamity-affected agricultural sector of the valley and announce adequate financial assistance to the farmers.

Muhammad Ishaq, an orchard owner in Swat district, said he had planted peach and plum orchards on 50 acres of leased land and spent millions of rupees on its look after, fertilizers and pesticides by borrowing from middlemen.

He explained the farmers had come under debts of middlemen as they had already obtained loans to look after the orchards. “When the crop isn’t produced, how they will repay the loans,” Ishaq questioned.

In a survey conducted by its Agricultural Advocacy Unit and the Khapal Kaliwal organisation, Kokari Kisan Council has estimated the cost of one acre crop as Rs150, 000. In the context, the survey added, the total loss of crops and orchards on 200,000 acres across Swat is about Rs30 billion.

Farmers have also sought the government to help them purchase fertilisers and high-quality seeds to make them able to stand on their feet.