Pakistan to gradually ease lockdown to save economy 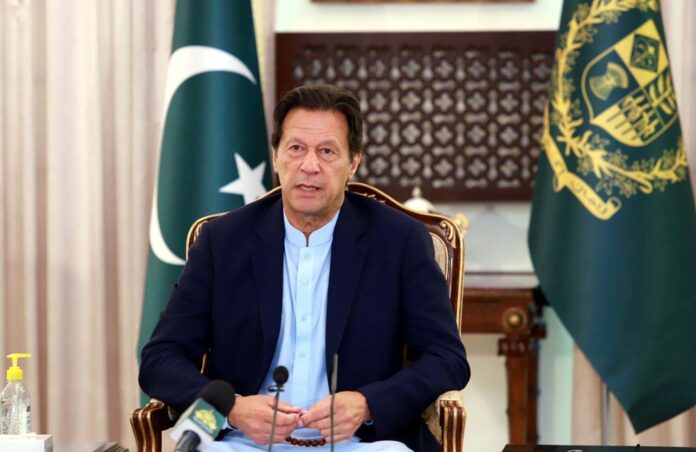 –PM says lockdown to be relaxed in coming days due to economic situation of country, problems being faced by common people

ISLAMABAD: Prime Minister Imran Khan on Monday said that the federal government has decided to gradually ease the lockdown in the coming days keeping in view the ground realities, especially the economic situation of the country and the problems of the common man.

Talking to members of the national and provincial assemblies via video link, PM Imran directed them to not only play their full role in providing relief to the people in this hour of need but also encourage the masses to take precautionary measures so that the spread of the coronavirus could be effectively stopped.

While addressing the MNAs and MPAs, who were stationed at commissioners’ offices and other locations, the premier said that comprehensive SOPs based on security measures have been prepared for each sector and public representatives should play an active role in implementing them.

“Keeping in view the ground realities, especially the economic situation of the country and the problems of the common man, the government has decided that the lockdown will be gradually eased in the coming days,” a statement issued by the PM office quoted Imran as saying.

The prime minister said that the government was trying its best to provide all possible relief to the people in view of the coronavirus situation, adding that despite the difficult circumstances, the government announced a total economic package of Rs1.25 trillion.

Imran said that the process of providing Rs12,000 to 12.5 million deserving families of Pakistan was being ensured on the basis of transparency and merit.

In addition, he said, a special programme has been launched to provide relief to labourers and workers and directed all elected public representatives to ensure that all the beneficiaries in their constituencies could easily avail the relief package provided by the government.

Addressing the members, the prime minister said that it was very encouraging that people from all walks of life across the country came forward to assist in the efforts and provide relief to the people in the difficult situation created by the pandemic.

The premier said that TORs have been prepared for the use of Corona Relief Tiger Force, comprising one million volunteers.

He added that the Tiger Force will not only help the district administration in providing relief to the people but it will also carry out important activities such as assisting in the implementation of security measures in public places and keeping the management informed about the stock situation of essential items at utility stores.

“You [volunteers] will have to register all those that have lost their jobs due to the lockdown at their respective union councils. Not everyone can register themselves so that is where the force will come in. You will also monitor the Ehsaas Emergency Cash Programme and give federal government feedback,” he said.

“If you see hoarding anywhere, don’t take action yourself but tell the administration. They will take action,” he added.

Imran said that a pilot project has already been launched in Sialkot in this regard on the basis of which Tiger Force can now fully be utilized.

According to Special Assistant to the Prime Minister on Health Dr Zafar Mirza, who spoke alongside Imran, of the total, some 17,000 volunteers belonged to the medical community.

Mirza said that medical professionals will be given specific roles so that they can help the government in implementing standard operating procedures (SOPs).

“Doctors will also volunteer for telehealth initiatives so that they can give advice to patients over the phone,” he said.

Meanwhile, Minister for Planning Asad Umar briefed the meeting on the situation and prevention of coronavirus.

On Sunday, Umar feared that around 18 million people could lose their jobs in the country because of the lockdown imposed to curb the spread of the coronavirus pandemic.

“According to the calculations of the Pakistan Institute of Development Economics [PIDE], between 20 million and 70 million people in the country might fall below the poverty line,” he said addressing a press briefing at the National Command and Operation Centre (NCOC) on Covid-19.

Umar, who heads the NCOC, had noted that an average of 24 people were dying because of Covid-19 in the country every day for the last six days and if the situation carried one in a similar manner, there would be 720 deaths each month.