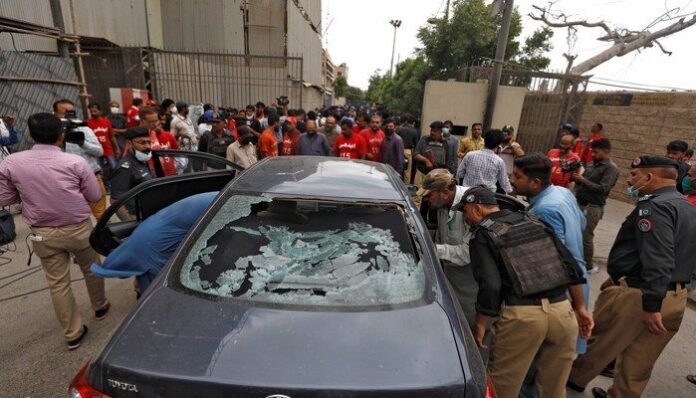 KARACHI: While investigators are hard at work to make headway into the attack on the Pakistan Stock Exchange (PSX) this week, a car similar to the one used by the attackers to reach their target was spotted in a TV drama of late.

According to sources, the car which the terrorists used to get to the PSX was seen in an episode of the TV drama aired on a private entertainment channel Wednesday last. The vehicle with registration number BAP-629 was used in the incident.

They said the vehicle was seen parked in the background of a scene of the drama shot in the parking area of the port city’s Hill Park.

The sources said while the episode was aired two days back, further investigation is underway to ascertain the date of the filming of the scene.

Four terrorists who had attacked the stock exchange building on Monday were also killed. A police officer and two security guards also lost their lives while foiling the attack. The outlawed Balochistan Liberation Army (BLA) claimed responsibility for the attack.

Speaking on the floor of the National Assembly (NA) on June 30, Prime Minister Imran Khan had said Pakistan has no qualms that Monday’s terrorist attack on the PSX was orchestrated in India.

“We have no doubt that this [attack] was carried out by India.”