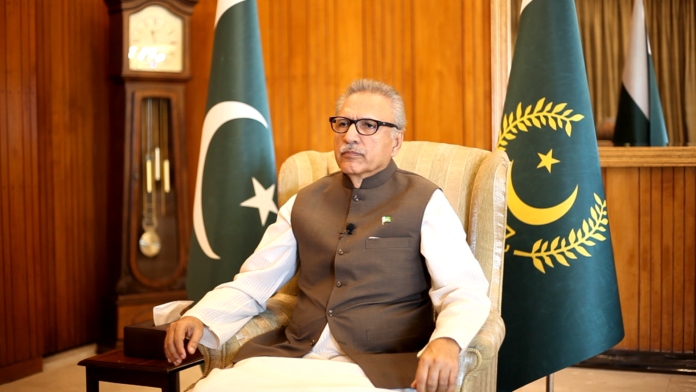 ISLAMABAD: President of Pakistan Dr Arif Alvi on Tuesday said that the adoption and growth of Artificial Intelligence (AI) in the country should be facilitated.

The president said this while addressing the inaugural session of the 1st COMSTECH Showcasing of Artificial Intelligence and Internet of Things (IoT) Products and Services at COMSTECH headquarters Islamabad.

Over 26 businesses, industries, strategic organisations, and centers of excellence are participating in this first of its kind mega event which would conclude on August 5.

Quoting a McKinsey report, he said that disruptive technologie such as mobile internet, artificial intelligence, IoT, advanced robotics, autonomous vehicles, next generation genomics and biotechnology, 3D printing, and new energy storage are expected to add trillions of dollars into the global economy.

He said that the Covid-19 pandemic has accelerated the development and adaptation of many such technologies.

The president urged experts to use modern technologies like satellite imagery and robots in agriculture, health and education sectors.

He further stated that the current government has undertaken a number of initiatives to promote the deployment of modern technologies, including AI in various sectors of the country, as a fundamental tool of e-government.

Federal Minister for Science and Technology Fawad Chaudhry while addressing the event said that the science ministry believes that steps should be taken to translate scientific and technological developments in Pakistan into products and services.

Fawad Chaudhry assured that the science ministry would continue to support research institutions.

He said that the science ministry greatly values the role being played by COMSTECH in the capacity building of OIC countries through bilateral and multilateral linkages and exchanges and in presenting the best of Pakistan’s scientific and technological capabilities to the world.

“We are closely working with COMSTECH for the success of a large number of initiatives and programmes, which have been launched under the leadership of Dr Iqbal Choudhary” he said.

He said that Pakistan was importing Personal Protective Equipment (PPEs) when the first Covid case emerged in the country on February 26. However, now the country is exporting PPEs to the world.

The minister also urged the use of mobile payments and transactions to document the economy.

He also stressed on the need for STEM education, use of 5G technology, AI programmes and development of drones.

He predicted that PayPal services in Pakistan will facilitate transactions for freelancers and people working online.

COMSTECH coordinator general while addressing the event said that the main focus of COMSTECH programmes is to develop technological skills and capacity of the youth of the OIC region.

CARE project director in his welcome address said that the impact of AI on the global Gross Domestic Product (GDP)  is expected to be $15.7 trillion.

“If Pakistan captures even one per cent of this market, its value will be close to $157 billion,” he said.