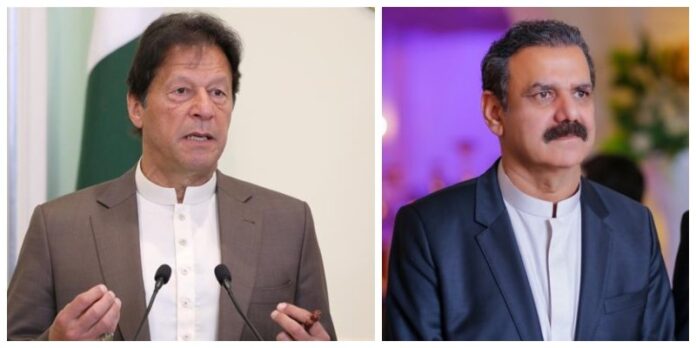 The Pakistan Tehreek-e-Insaf’s (PTI) official Twitter account stated that PM Imran was satisfied with the evidence presented in Gen Bajwa’s defence, while in another tweet Senator Faisal Javed Khan said the premier had directed Bajwa to continue working as his aide and as the SAPM on information and broadcasting.

Journalist Ahmed Noorani had alleged on a website that Gen Bajwa had set up offshore businesses of his wife, sons and brothers using his offices.

Bajwa resigned as the PM’s aide after almost a week of silence but said that he would continue to work as chairman of the China-Pakistan Economic Corridor (CPEC) Authority.

He also said that he was ready present documents about his family’s assets and the money trail before any judicial forum.

According to the news report, Nadeem Bajwa – who started as a delivery driver for the Papa John’s Pizza – Asim Bajwa’s wife, his brothers, and sons now collectively own a business empire comprised of 99 companies in four countries. These consist of 66 main companies, and 33 branch companies.

The news report added that Bajwa’s wife was a shareholder in all the foreign businesses, and the estimated current net worth of businesses and properties of these companies jointly owned by Bajwa’s wife, Farrukh Zeba, is $52.7m.

These companies have investments in the real estate sector and own 13 commercial properties in the US, including two shopping centres, according to US government state records.

It cost an estimated $52.2m to develop these businesses and $14.5m to purchase properties in the US, according to the report.

The allegations arose after he failed to disclose the investments made by his wife abroad, but Bajwa replied that on the date of filing of the assets declaration, i.e. August 22, his wife was no longer an investor or shareholder in any business of his brothers or anyone else.

“My wife had disinvested all her interests at 01.06.2020 in any entity abroad and such fact has been duly documented in the official records in the USA,” he said.

“The process of change of name in the SECP [Securities and Exchange Commission of Pakistan] in Pakistan has been conducted in due course, but that was only a ministerial function since the interest in the parent companies in the USA stood no more in the name of my wife as on 22.06.2020 i.e. the date of filing of my declaration of assets and liabilities as a SAPM,” he added.

He added that over the last 18 years, his wife had only invested $19,492 in his brothers’ companies and that this was all from their own savings

“Over 18 years the actual out of pocket cash investment into businesses by my brothers and wife has been about $73,950. It is further pointed out that out of $73,950, my wife’s contribution, as stated aforesaid, is $19,492. Thus, the total out of pocket cash contribution of my five brothers, for eighteen years, has been $54,458,” he said. He further added that of the total assets and franchises purchased at around $70 million, $60 million had been bank loans and other financial facilities.

Speaking on the allegations against his sons, Bajwa said that Scion Builders and Estates (Pvt) Ltd, which was owned by his son “has never done any business and is dormant since inception”. Similarly, SAPM said that Advance Marketing (Pvt) Ltd has also remained dormant since the beginning. Regarding Hima­laya Ltd, he said his son owned the only 50 per cent of its shares.

He admitted that Mochi Cordwainers was registered in the name of one of his sons but said that it had only incurred losses for the last five years.

Bajwa said that a business entity, Krypton, was owned by his son. It dealt in mines and minerals and was registered at the time when he was posted in Balochistan. “Unfortunately, no one has bothered to find out that the said business entity is registered as a sole proprietorship in the FBR [Federal Board of Revenue] in 2019, but it has always been dormant and has not done any business,” he added.

Replying to an accusation regarding a house own by his son, he stated that the house was bought for only $31,000 in cheap foreclosure proceedings and that the journalist should have researched the matter before accusing him.