The Pakistan Broadcasters Association announced the formation of a digital media wing that they claim will represent the business interests of digital publishers, apps, and digital advertising agencies. Advertising agencies are sceptical about the initiative.

Digital advertising agencies across Pakistan are on high alert in light of a new initiative from the Pakistan Broadcasters Association (PBA) called the digital media wing (DMW). Speaking to Profit under the condition of anonymity, several founders of digital media advertising agencies shared documents from the PBA, demanding that digital agencies register themselves as members of the DMW in order to gain a collective industry body representative.

According to a letter sent on July 2, 2020, from Muhammad Ali Butt, an executive director of the PBA, members of the DMW will provide services for the clearance of their digital media outstanding dues and dispute resolution between digital broadcasters, advertising agencies, and advertisers. The letter also states that the PBA also aims to play a role in the growth and development of digital media in Pakistan and to encourage digital innovation.

In its letter to digital media agencies, the PBA states that the DMW will ensure timely payments of outstanding payments due to digital advertising agencies by advertisers, manage the regularisation of appointments of clients such that no client can advertise on any digital media property without clearing agency dues, provide a mediation forum for disputes, and offer a platform for exchanging ideas.

“Over the last couple of years, just like all other countries, the digital media in Pakistan has also gained significance and our broadcasters have also put their digital products front and center due to the emerging potential market of digital media advertising in Pakistan,” said Ali Butt, in his letter to digital agency leaders in July 2020. “PBA now aims at extending its services to its members, clients, and advertising agencies for digital media as well. We, therefore, invite you to get your digital media agencies registered with PBA.”

As reported by Profit, a post-Covid-19 forecast from a leading Publicis Groupe media agency said that advertisers in Pakistan are expected to spend $440 million – a drop of almost $55 million – access all advertising mediums during the 2021 fiscal year. Nearly 26% of this, valued at $114.4 million, will be directed towards digital media – search, mobile, online video, social media – according to the forecast. A separate forecast from a WPP agency said that by 2023, digital will make up 49% of advertiser marketing budgets, valued at $300 million.

Speaking to Profit under the condition of anonymity, several founders of digital media agencies expressed concerns that the PBA has ulterior motives with the DMW, however noble the intentions appear.

“Since the PBA was formed, some media agencies were blacklisted and some were not blacklisted for failing to clear money owed to broadcasters,” said a source that operates in both the traditional and digital media buying space. “Depending on who the decision-makers at PBA are friendly with or what behind the scenes deals they could muster up, agencies may be excused from being blacklisted. When an agency is blacklisted because a telecom client hasn’t paid them yet, their consumer goods client has to go search another agency to work with, often going for an agency that proves a track record of never being blacklisted.” 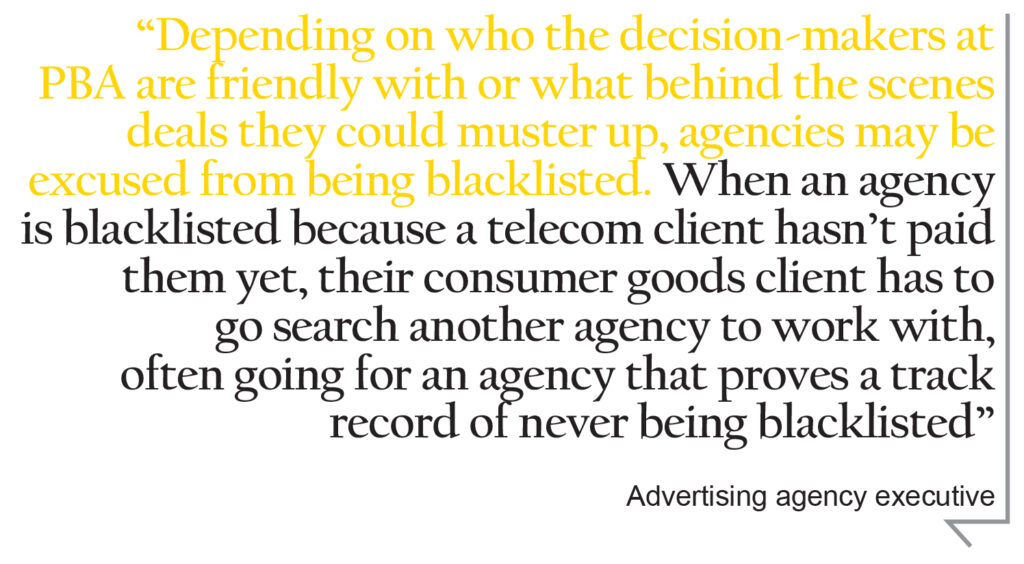 Instead, sources told Profit that given the decision-makers at PBA and their subsequent track record, the seemingly well-intentioned DMW will end up hurting smaller agencies and create backdoor deals in exchange for relaxing blacklisting terms.

“When the decision-maker at PBA, who is a leader at a TV channel which we will call ‘The Crack of’, chooses to withhold blacklisting a media agency for nonpayment of dues, a member of the sales team for The Crack Of calls said media agency and reminds them that they are not blacklisted due to the influence of their presence on the board of the PBA,” said another source that spent two decades in mainstream media planning and buying before shifting entirely to digital. “There is no doubt that this practice will continue with the digital media wing.”

Sources are further concerned that the DMW will also gain access to information about digital media agency billings, using the information to undercut digital media agencies with direct deals instead. This is a concern that Profit finds unlikely as the bulk of digital publishers win business through agencies and cutting out the middleman at this stage is unwise. It is also against the policies of the PBA.

Another concern raised was the nature of language in the letter from the PBA pertaining to digital media agency applications, which will be scrutinized by a committee that decides whether an applicant should be forwarded to the board of directors. The letter from the PBA does not clarify what factors are being considered for the basis by which an applicant digital media agency would be rejected by the DMW, only saying that if the board of directors ‘may grant the application of registration for the digital clearance’ by a vote of a simple majority. The letter adds that if an applicant is rejected ‘by any means, the applicant shall be eligible to re-apply after a period of 1 year has elapsed from the date of the communication of the refusal.’

“The Secretariat will initiate an action of suspension against the defaulting advertising agencies / MBHs across all digital broadcasters/properties registered under these rules and the agencies/MBHs so suspended will only be restored on payment of the reported digital media outstanding dues, restoration fee and a Late Payment Surcharge (LPS) in accordance clause 15 of Rules and Regulations,” said the PBA letter. “In case the default in payment of the reported outstanding dues of digital media continues till one month the defaulting advertising agency/MBH shall also be suspended across all satellite member broadcasters.”

Confirming the concerns of digital media agencies that spoke to Profit, the letter adds that the secretary-general can allow extension up to 7 days and further extension up to 14 days with the approval of the Chairman, to the advertising agencies or media buying houses. It is unclear what the basis would be for either extension.

“No digital media broadcaster/property shall run/accept advertisement of a suspended agency/MBH, or a blacklisted client,” the PBA letter says. “In the event of violating this rule, the violating member shall be liable to a fine equivalent to the 100% of the invoice value.”

The day before digital media agencies received a letter from the PBA, digital publishers received a letter from the All Pakistan Newspapers Society (APNS) for a similar initiative that would serve digital publishers and outlets in helping them clear their dues. This includes publishers who operate a website, social media page, YouTube channel, and more variations of a digital presence. This could possibly also include social media content creators classified under influencer marketing as well.

Digital publishers that spoke to Profit expressed concerns that the executive committee of the APNS should take into account that direct payments from their largest advertisers Google Adsense and YouTube are already prompt and timely, adding that the fees listed for representation are not affordable by every digital publisher and should be reduced to better reflect the market realities. 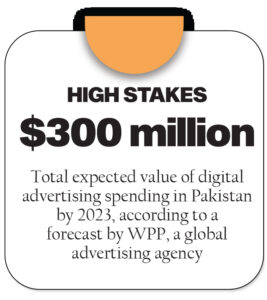 Counterpoint from PBA, APNS, and supporters

Speaking to Profit, the CEO of a prominent WPP creative agency said that both initiatives – that intend to protect digital agencies and digital publishers from bad debts from their clients – is a positive initiative and can only help the industry, adding that it is unlikely that the PBA will ban any agencies that have not been paid by their clients.

“I don’t think this has any merit as this is absolutely illogical and PBA will face a lot of backlashes if they even try this,” she said. “And I think the PBA is smart and wise and also careful therefore I don’t see any weight in this rumor as it’s not making sense.”

“I don’t think PBA can ban anyone unless their members are to be paid by that media agency and that media agency defaults, same as how APNS supports and backs their members of newspaper publishers,” said another source. “I have no clue what PBA has to do with digital agencies unless digital agencies are giving media buying sales to PBA members. I think it’s rightful for them to take such actions if the media agency is not paying them and they have all the right to do this for their TV channel members.”

“In this way, both initiatives would benefit the industry, holding advertiser clients accountable and cleaning up what we can in the media supply chain,” they said.