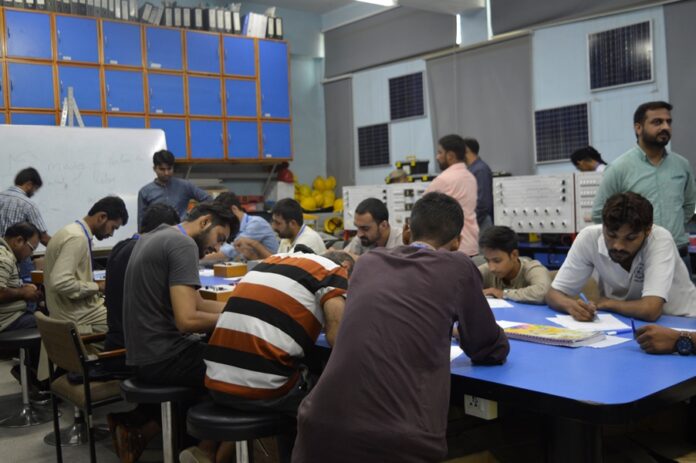 ISLAMABAD: The government has ramped up its efforts to enrol 100,000 youth for high-tech and traditional trades under the ‘Hunarmand Pakistan’ (Skill for All) project of the Prime Minister’s Kamyab Jawan Programme.

The initiative was meant to increase the number of Pakistan’s skilled workforce by imparting six-month traditional training courses to 50,000 youngsters, besides training another 50,000 in high technologies.

Talking to APP, National Vocational and Technical Training Commission (NAVTTC) Executive Director Dr Nasir Khan stated, “All is set for the resumption of the registration process under the first phase of ‘Hunarmand Pakistan’.”

Highlighting the institution’s future endeavours with regard to the Kamyab Jawan Programme, he said, “Under the first phase, which was launched at the beginning of this year, a target was set for imparting six-month training courses to 50,000 youth of underdeveloped areas in traditional trades like welding, plumbing, dress-making, cooking, electric and others.”

NAVTTC has so far enrolled 20,000 individuals under this phase, who have already completed one-month training of the course, he noted.

Khan said enrollment for the second phase would commence after September 15 for registration of 30,000 youth from underdeveloped areas.

To a query, the executive director said some 280 institutions were dedicated in the less-developed areas to impart training in such trades.

Similarly, he added, the government has set a target to train 50,000 young people in high tech trades including artificial intelligence, robotics and cloud computing.

So far, 17,000 individuals have been enrolled for such courses.

“We are fully committed to training 50,000 each in high tech and traditional trades under ‘Hunarmand Pakistan’ by end of the Fiscal Year 2020-21,” he resolved.

He said that youth from less developed areas were also being given an opportunity to get training in high tech courses from modern institutions located in major cities. Boarding and lodging facilities were also being provided to such students, he added.