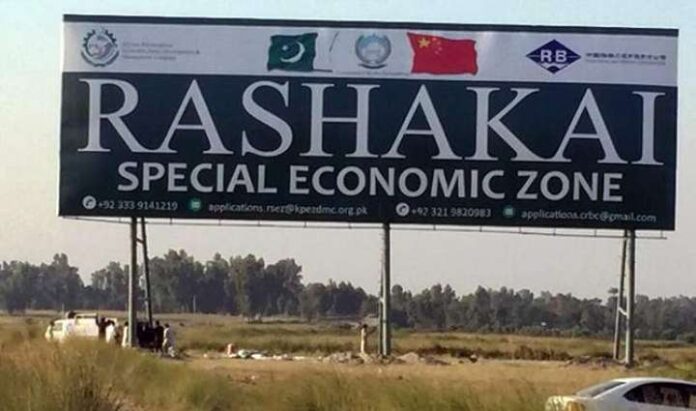 PESHAWAR: National Assembly Speaker Asad Qaiser has said that the Rashakai Economic Zone, which has been built under the China-Pakistan Economic Corridor (CPEC), would be inaugurated by Prime Minister Imran Khan on November 21.

Qaiser announced this while talking to media after a review meeting on the Rashakai Economic Zone inauguration at the residence of CPEC Committee Chairman and NA Member Arbab Sher Ali Khan on Monday. Federal Defence Minister Pervez Khan Khattak was also present on the occasion.

“The Rashkai Economic Zone will usher in a new era of growth that will help further develop our economy,” Qaiser said. “The incumbent government is taking all possible steps to develop the country’s economy on modern lies, besides ensuring welfare of the people and promoting trade relations with Afghanistan.”

He said that trade expansion with Afghanistan would not only provide employment opportunities to the people of both countries but would also bring peace in the region. He said the new zone would employ around 200,000 people.

The NA speaker reiterated that a peaceful Afghanistan was in the interest of Pakistan. Islamabad wanted to further strengthen its trade ties with central Asian countries which would not be possible without peace and stability in Afghanistan, he added.

“We would also invite Afghanistan to formally join CPEC so that the country could be put on the track of development,” the speaker said. “An economically developed Afghanistan will defeat terrorism & extremism and bring durable peace in the war-riddled country.”

Qaiser maintained that Pakistan was taking all possible measures to enhance its trade volume with Afghanistan, adding that work on the fulfillment of commitments made by the incumbent government for promotion of trade with Afghanistan was underway in full swing.

On a query, he said comprehensive reforms were underway in Khyber Pakhtunkhwa which were aimed at specifically benefitting the downtrodden segment of the province.

“For the first time, a CPEC Conference is being held in Peshawar on November 13,” he said, adding that major uplift projects were being given to the province so as to develop the region on modern lines.