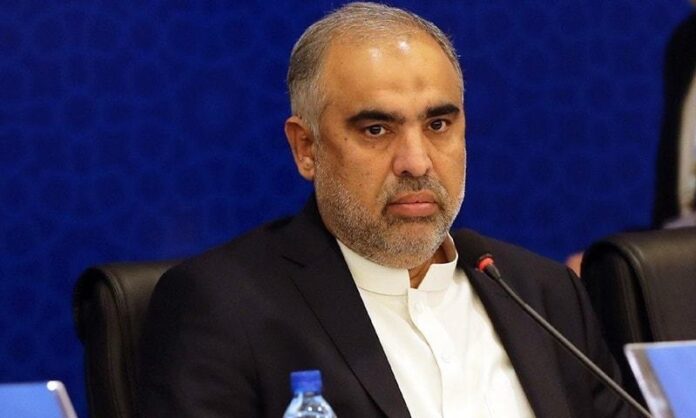 PESHAWAR: National Assembly Speaker Asad Qaiser said on Friday that Pakistan intends to enhance the scope of China-Pakistan Economic Corridor (CPEC) to Afghanistan so as to connect Khyber Pakhtunkhwa with the Central Asian countries.

Addressing a conference titled, ‘The role of parliament in enhancing investment, trade and people-to-people exchange under CPEC’, he said after the start of intra-Afghan talks, efforts were underway to revive this historical trade route, which would be in the best interest of the people of both countries.

“Solid efforts will be made on parliamentary level to ensure maximum benefits of CPEC projects for KP,” Asad Qaiser said. “We are also playing our role to secure the due rights of the province, including its share on account of the hydel power profit.”

Qaiser directed the officials concerned to expedite work on cases pertaining to KP’s rights in CPEC projects, and forward a summary in this regard to Islamabad at the earliest.

In his address, KP Chief Minister Mehmood Khan claimed that the incumbent provincial government has brought more CPEC projects to the province than the previous government.

“The Nawaz Sharif government had just provided one CPEC economic zone to the province, while we have added motorways, power projects and the construction of Chishma Right Bank Canal project to the framework.”

He said that Prime Minister Imran Khan would inaugurate the Rashakai Economic Zone on November 21st.

On power supply issues, the CM said that Pakhtunkhwa Electric Company (PEDO) has initiated several power projects, the completion of which would ensure the provision of cheap electricity to local industries.

Meanwhile, the participants of the panel discussions demanded the government to include women businesses in the China-funded project. They highlighted that women-centric projects covered not even 15 per cent of the CPEC framework, which meant that the government was ignoring more than half of the country’s population.

Shamama Arbab, President of the KP Women Chamber of Commerce and Industry, informed that most women were associated with home-based industries, “but [they] need more support to develop their businesses”.

She demanded the government to provide interest-free loans to women, facilitate small & medium enterprises, and help entrepreneurs in market research in order to enable the province compete with other parts of the world.

The participants also demanded the government to direct banks to provide lands to the SMEs in the province, noting that Pakistani banks were still reluctant to invest in the province.