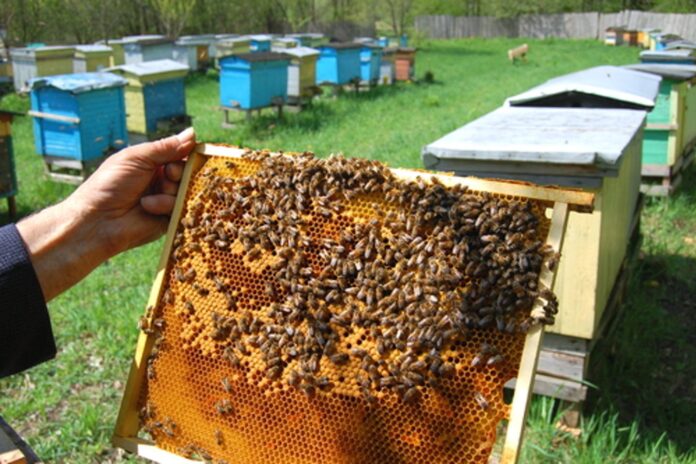 PESHAWAR: Honeybee keepers in Khyber Pakhtunkhwa (KP) have been hit hard by the coronavirus pandemic, leading to almost 60 per cent reduction in the production of honey.

“Beekeepers could not transport bees to areas with more flowers to collect nectar due to which 20pc of them died while 40pc were not able to produce honey due to weak health,” he explained.
He said that all medicines needed to cure bees were imported from China, however,

imports had stopped for many months which also affected honey production.

Similarly, exports to Gulf countries, which usually take 80pc of KP’s honey, were reduced to 40pc due to lockdowns which incurred losses to not only the people involved in the business but also to the national exchequer.
The second-largest export market from Khyber Pakhtunkhwa’s honey is Afghanistan where exports were also damaged due to administrative and border management issues and border closures.
Now, traders in Afghanistan have signed agreements with India and Iran for honey instead.
Bacha said that KP used to produce 30,000 to 35,000 tonnes of honey annually, but production reduced to 12,000 tonnes due to deforestation and lack of seasonal and flowering trees. “The price of honey has now reached Rs20,000 per maund,” he added.
The APBEHA official said that although many projects had been launched with the help of international organisations, only limited people could benefit from those projects while nothing changed for the sector as a whole.
Further, he said that despite spending billions of rupees on the Billion Tree Tsunami Project in KP, flowering trees, which could increase honey production and exports, were not planted by the government despite the assurance by concerned authorities during a meeting with beekeepers.
Bacha lamented that although 1.2 million people are employed with the honey business in Khyber Pakhtunkhwa at present, the government remains indifferent to its potential and has not granted it industry status. “No one in the honey sector has been provided or even ben considered for the provision of relief to mitigate the losses incurred by the Covid-19 lockdowns,” he added.
He demanded the government to plant flowers trees in all areas of the province as it could increase honey production in the country.
He also demanded that industry status be granted to the honey sector, in addition to building training centres for people associated with the sector to increase the country’s honey exports.
- Advertisement -
Facebook
Twitter
Linkedin
WhatsApp
Email
Previous articleIndian farmers step up pressure with hunger strike against reforms
Next articleGovt criticised for delaying purchase of LNG despite gas shortages