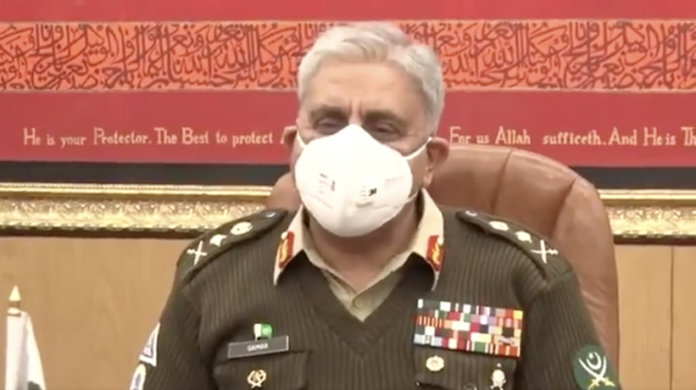 The meeting took place at General Headquarters (GHQ) wherein matters of mutual interest were discussed, the military’s media wing said in a statement. “Both reaffirmed the commitment towards the common goal of peace and stability in the region and agreed on continued engagement at multiple levels,” said the statement.

The visiting dignitary acknowledged Pakistan’s ongoing efforts for enduring peace in Afghanistan and the region, said the military’s media wing.

The development comes as Afghan government representatives and Taliban officials are due to resume their power-sharing talks, although battlefield clashes and targeted killings risk undermining efforts to end the war.

Hours after the meeting, The US special representative tweeted that he was heading back to Doha “with expectations that the parties will make tangible progress in the next round of Afghanistan Peace Negotiations”.

“Both sides must demonstrate they are acting in the best interest of the Afghan people by making real compromises and negotiating an agreement on a political settlement as soon as possible and an immediate significant reduction in violence/ceasefire,” he added.

He condemned the “current levels of violence” and said that those that attempt to perpetuate these vicious cycle are hindering the peace process. “They do not reflect the will of the Afghan people, who yearn for peace,” he added.

At the time, General Bajwa had lauded the role of RSM had played in creating peace and stability in Afghanistan. He had assured Khalilzad and General Miller that Pakistan would continue to play its positive part in enhancing the peace and stability of the region.

The visiting dignitaries had also appreciated Pakistan’s untiring efforts for facilitating the process towards the mutual objective of peace in the region.

On December 15, 2020, Army Chief Bajwa had met with the Ambassador of the Kingdom of Saudi Arabia Nawaf Saeed Al Malkiy to discuss matters of mutual interest, according to a statement released by the ISPR.

The statement had added that during the meeting, the two leaders had shed light on several important matters, including the regional security situation and bilateral defence relations between the two brotherly countries.

Pakistan facilitated a landmark deal between the US and Taliban signed on February 29, 2020. The deal envisages a road map of the US troops’ withdrawal in return for the Taliban promising not to let Afghan soil ever again be used by terrorist groups. But the deal hinges on the success of intra-Afghan dialogue, which will decide the political future of Afghanistan and pave the way to end the 19-year old conflict.