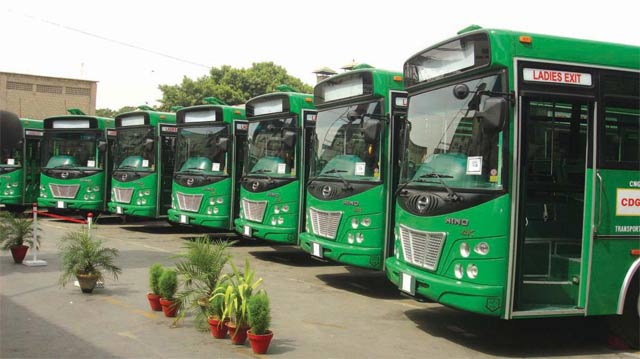 ISLAMABAD: As the Sindh government had deferred the timeline for operationalisation of the much-awaited Green Line Bus Rapid Transport System in Karachi, Planning Minister Asad Umar on Monday asked authorities concerned to make the transport system operational by August 2021.

During a meeting to deliberate upon Karachi development projects, the minister asked the Sindh Infrastructure Development Co Ltd (SIDCL) to review all activities to achieve specific timelines on development projects, particularly with regard to the implementation of the Integrated Intelligent Transport System (IITS) in Karachi.

The meeting was also attended by SIDCL chief executive officer, board chairman, chief operation officer, a representative from the Ministry of Railways, and senior officers from other ministries/institutions concerned.

According to officials, SIDCL CEO Bilal Memon briefed the minister about progress as well as procurement update on the Green Line infrastructure.

Speaking on the occasion, Planning Minister Asad Umar stated that the Center was taking all measures to expedite the BRT project so as to facilitate Karachiites, who were currently exposed to the severe situations due to the absence of adequate public transport.

He said that the federal government was working beyond its responsibility to give Karachi its due rights, adding that Green Line BRT should be operational by August 2021.

As per the officials, the meeting was informed that the prototype buses would be ready for testing and commissioning by April 25. Besides, the IITS contract Package-A would be signed on March 26; Package-B on April 2; whereas the award of Operation and Maintenance (O&M) would be announced by May 2021.

Reviewing the Karachi Circular Railway (KCR) Freight Corridor Project, Asad Umar directed the Ministry of Railways, SIDCL and Public Private Partnership Authority (P3A) to finalise the tripartite agreement to determine the scope of work in all projects to be initiated on PPP/BOT modes.

According to him, the tender for buses has been issued and 100 buses for Green and Orange lines would arrive by the end of September or October 2021.

Rejecting the planning minister’s statement regarding the operationisation of Green Line BRT by August, Qadir said that the federal minister knew nothing about the project and that the buses would not arrive before October 2021.

While the federal government initiated the Green Line project, the Orange Line was supposed to be a Sindh government scheme. Under the original arrangement, the Centre was only responsible for developing the route for Green Line, while the Sindh government was to procure buses and run operations for both the Green and Orange lines.

The BRT Green Line project, with intersections, has a 24km long route, which includes 12.7km elevated, 10.9km at grade, and 422 meters underground route, besides 25 stations.