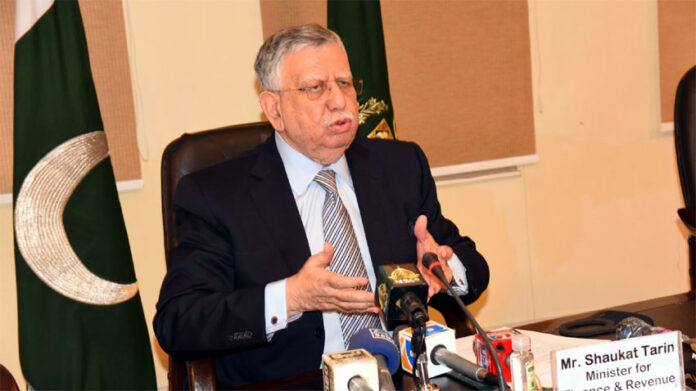 ISLAMABAD: Minister for Finance and Revenue Shaukat Tarin Wednesday said the government had decided to provide tax relief in edible oil to bring the prices down by Rs40 to Rs50 per kilogramme.

“After providing tax relief we will ensure the price reduction in cooking oil and ghee by Rs40 to Rs 50 per kg,” he said while addressing a press conference flanked by Minister of State for Information, Farrukh Habib, and Special Assistant to Prime Minister (SAPM) on National Food Security and Research, Jamshed Iqbal Cheema.

He said that the government would also provide cash subsidy to poorest of the poor to buy essential food items including sugar, flour, pulses and ghee.

The finance minister said despite a big increase in international prices of palm oil by over 50 per cent, the government was looking to decrease the prices to provide maximum relief to the masses.

He said food inflation had witnessed a big jump in across the world during last couple of years which was the highest in over 4 decades, adding that in the international market, the price of palm oil has increased from $760 per MT to $1136 per MT, while in Pakistan the prices of cooking oil increased by 33pc.

“The government is also building strategic reserves of pulses and onions to help streamline prices,” he said.

He that the CCP has also been directed to take measures against the cartelisation of ghee manufacturers, vowing that in the medium and long term, the government would build commodity warehouses, cold-storages so that farmers and purchasers are linked directly without involving a middleman.

In a question, the finance minister replied, “We are monitoring the fiscal side and the government has decided to impose a 100 per cent duty on non-essential items besides, also levying regulatory duty on selected items in order to curtail the current account deficit (CAD).”

Talking about the increase in petrol prices, he said that the government is providing Rs123 per liter of petrol. “I would like to mention that petrol in India is being sold at Rs250 per litre but we are providing cheaper petrol than all the countries in the region,” he added.

He further said that there is a target of 600 billion petroleum levy in the budget out of which the government has not collected a single rupee so far.

To another question, he replied that he is not “going anywhere and I believe in PM Imran Khan who has assured me that I would be made a senator soon.”

Speaking on the occasion, Farrukh Habib said the government was striving to pass on maximum relief to masses by mitigating impact of rising prices of commodities in international market.

He also said there had been a marked increase in prices of edibles in the international market due to economic fallout of the coronavirus pandemic and stressed that all of the government’s policies were people-centric, and in accordance with directions of Prime Minister (PM) Imran Khan, who he recalled had stressed on reducing prices of all the essential commodities.

“This is why the National Price Monitoring Committee (NPMC) is convened every Wednesday to review the prices of commodities consumed by people on daily basis,” he added.

Farukh said the presser was crucial to curb opposition’s propaganda on prices of edibles by sensitising the media and people about initiatives taken by the government for the welfare of the masses.