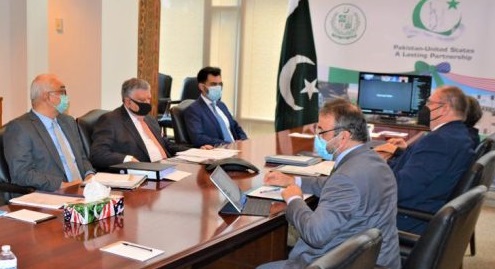 ISLAMABAD: The meeting of the the National Price Monitoring Committee (NPMC) on Wednesday was told that sugar mills in Sindh and Punjab have started production, hence with arrival of new stocks of sugar in the market the prices will be lower in the coming days.

This was informed by the secretary Ministry of Industries and Production after Adviser to the Prime Minister on Finance and Revenue Shaukat Tarin expressed concern on the high prices of sugar at retail level in Sindh and Balochistan despite the start of crushing.

While reviewing the price of sugar in the country, the secretary Finance informed that prices are easing out in Punjab, KP and Islamabad due to the start of crushing of crop of sugar and proactive measures of the government.

The committee also reviewed the prices of wheat, sugar, pulses, chicken and other essential food items in the country.

The secretary Finance briefed the NPMC that the weekly SPI situation had increased by 1.81 per cent last week.

He also apprised the meeting that prices of essential commodities registered decline as compared to the same period last year.

The NPMC emphasised on building strategic reserves of moong and providing incentives to farmers to produce maash pulse domestically to lessen import dependence.

The secretary Finance further updated the meeting that the prices of wheat flour bags remained consistent at Rs1,100 per 20 kg due to the proactive measures of the Punjab, KP governments and ICT administration.

Tarin expressed concern over the significant price difference of wheat flour in Sindh and Balochistan as compared to other provinces. He advised the provincial chief secretaries of both provinces to increase the daily releases of wheat to improve the supply situation in the markets and make efforts to bring the prices to a lower level.

Observing the stock position of fertilisers, the adviser directed the provincial governments to take strict action against hoarders and prevent shortages.

Shaukat Tarin said that the government has a firm commitment to prevent hoarding, therefore, a ‘whistleblower against hoarders law’ shall be introduced and enforced soon.