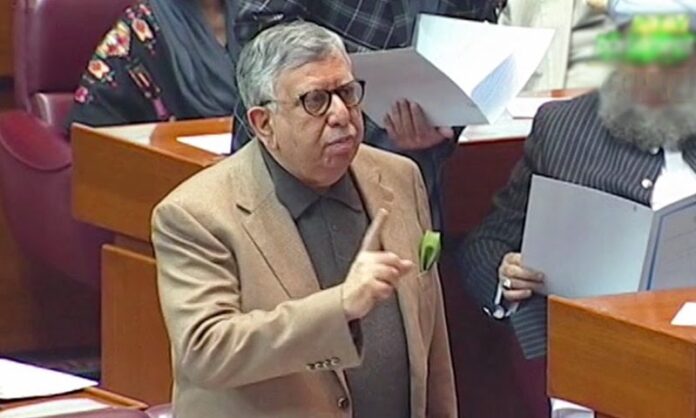 ISLAMABAD: Federal government Thursday got the Finance (Supplementary) Bill 2021, also called as ‘mini-budget’ by the opposition parties, sail through the National Assembly on Thursday despite opposition’s ruckus.

The House also passed the State Bank of Pakistan (Amendment) Bill 2021. Both bills were tabled in the National Assembly on December 30.

The government introduced changes to Clause 3 of the bill, under which small shops will not be taxed on bread, chapattis, sheermal, naans, vermicelli, buns and rusk. Tier one retailers, restaurants, food chains and sweet shops will be taxed on the sale of these items.

The government’s amendments to Clause 5 and Clause 6 were also approved during the session.

By this measure, the government proved an edge over the opposition benches with majority of 18 parliamentarians to get the bill passed.

The National Assembly comprises 342 lawmakers, of which the government has 182 MNAs, while the Opposition has 160 MNAs.

While 14 of the government’s lawmakers were absent from the session, while 10 from the Opposition’s side didn’t show up.

The passage of both the bills would help the government ensure its sixth review of the $6 billion Extended Fund Facility (EFF) cleared by the International Monetary Fund (IMF) executive board, paving the way for the disbursement of about $1 billion tranche.

Last month, Finance Minister Shaukat Tarin introduced two bills in parliament to give effect to the Rs375 billion mini-budget and grant autonomy to the central bank.

Earlier, the lower house of parliament resumed its session Thursday afternoon with Speaker Asad Qaisar in the chair.

Prior to the commencement of the crucial NA session, Prime Minister Imran Khan arrived at parliament and chaired a meeting of the parliamentary groups of parties included in the ruling alliance led by the PTI to supercharge the efforts to counter the opposition’s resistance and steer the bill into law.

At the beginning of the session, PM Imran Khan was greeted by the opposition benches with loud sloganeering as treasury lawmakers resorted to desk thumping.

At the outset, PPP’s Shazia Marri moved a motion recommending that the finance bill be circulated for public opinion under Rule 124 of Procedure and Conduct of Business in the National Assembly so that it could be demonstrated how “anti-people” it was.

Voting also took place on several amendments moved by the opposition to the finance bill that were subsequently rejected through a voice vote.

The opposition further demanded that a physical count be conducted for some of the amendments tabled by the opposition, including those by Mohsin Dawar and PML-N’s Shahid Khaqan Abbasi. However, the NA speaker refused under Rule 29 of Procedure and Conduct of Business in the National Assembly.

A physical count was later conducted on the amendments moved by PPP’s Shazia Marri, with 168 lawmakers in favour of it and 150 against it.

Abbasi then questioned why it was necessary for the government to introduce a mini-budget and said that such a massive tax burden had never before been presented in the country’s history.

“It has been six months since you passed the finance bill. Have your revenues declines or expenses increased since then?” he asked. He also questioned why the people were being burdened with additional taxes of Rs350 billion.

Responding to the opposition’s queries, the finance minister said the finance bill was not aimed at imposing new taxes but documentation of the economy to broaden the tax net.

Train said that the government has decided not to withdraw tax exemptions on basic essential items such as milk, bread, laptop and solar panels.

Tarin stated that the IMF had called for imposing a value-added tax when he had previously served as the finance minister. He also emphasised the need for documenting the economy, stating that people’s incomes were not being taxed because they didn’t fall under the tax net.

He went on to add that some of the taxes in the mini-budget had been removed, informing the opposition that this was about “documentation not taxes”.

PPP Chairman Bilawal Bhutto-Zardari said that the amendment he introduced concerned taxes on crude oil and imported items. “My question to the finance minister is whether they have accepted this. He himself said that they are withdrawing some of the taxes.”

He questioned whether the finance minister had an issue with the fact that it mentioned his name and those of Shazia Marri and Raja Pervaiz Ashraf. “What was the harm in it being accepted?”

Referring to the finance minister, Bilawal said that Tarin stated that past governments had made matters worse even though he had previously served as the country’s finance minster.

“Tarin said he did not know why there was hue and cry [over the mini-budget]. We request him to visit the streets of Karachi and ask the people about their economic situation.”

The PPP chairman said that some Karachi lawmakers had moved amendments and had also expressed their reservations regarding the mini-budget. He called on them to reject the finance bill and work with the opposition to steer the country out of the economic situation.

Responding to the PPP chairman, the finance minister said the opposition had claimed that the government was sacrificing the country’s economic sovereignty and national security.

“But they went to the IMF approximately 13 times. Did they forfeit our economic sovereignty each time?” he asked.

Taking the floor once again, Bilawal said that the finance minister had claimed that he did not renege on the promises he had made.

“But neither the finance minister nor the prime minister stick to their promises.” He said that this was the time to show the people the government’s success in running the country before the next elections.

“But what is your success? The Economist says that Pakistan is the fourth most expensive country in the world, the most expensive in the region.” He said that the inflation had risen to double digits and while the debt to GDP ratio had also soared. This is the what Naya Pakistan has delivered, he said.

Opposition up in arms over ‘bulldozing’ of SBP bill

Shortly after the NA passed the mini-budget, the opposition benches were up in arms against the “bulldozing” of the SBP bill and called for holding a detailed discussion after the speaker suspended the rules for debate.

Addressing the speaker, PML-N’s Ahsan Iqbal called on him to not suspend the rules of the House. “If you suspend the rules and bulldoze the bill in the darkness of the night, then your name will go down in history among those who conspired to sell the country’s economic sovereignty.”

He urged the speaker to let lawmakers discuss the bill for two days.

Shahid Khaqan Abbasi said that the SBP bill was not in the country’s interest. He said that the opposition was ready to debate the bill today and tomorrow.

Taking a dig at the government, PPP Chairman Bilawal Bhutto-Zardari said that it was very rare to have the premier and the entire front row of the treasury benches in attendance. He reiterated calls for a detailed debate.

“This bill says that Pakistan’s defence expenditure will have just one bank account and all expenditures will be made through that account,” he said, adding that this would make it easier for “international forces” to scrutinise the country’s defence and nuclear expenditure.

Following this, a clause by clause vote was initiated on the bill, all of which were approved by the House.

Prior to the commencement of the crucial NA session, Prime Minister Imran Khan arrived at the Parliament and held a meeting of the parliamentary groups of parties included in the ruling alliance led by the PTI to supercharge the efforts to counter the opposition’s resistance and steer the bill into law.

As per sources, there was a heated exchange between Defence Minister Pervez Khattak and Energy Minister Hammad Azhar over refusal of natural gas supply to the consumers in Kyber Pakhtunkhwa.

Khattak expressed his displeasure over the current situation and reportedly later left the meeting. He, however, later came back to the meeting and said he had stepped outside to “smoke a cigarette”.

It is pertinent to note that the opposition also held a protest outside the Parliament, which was led by opposition leader and PML-N President Shehbaz Sharif.

Shehbaz stated that the opposition has “rejected the mini-budget” as it would further burden the common man under a slew of new taxes and would increase inflationary pressure.

On the contrary, Information Minister Fawad Chaudhry said the mini-budget will bring betterment to the country’s economy.

Bilawal went on to blame the Imran Khan-led government for pressing on the contentious bill due to an “egotistical” attitude which, he said, would come at the cost of the common man’s well-being. “But because of your stubbornness and ego, you took decisions that are a robbery of the common man’s pockets.”

The PTI government created hardships for people by initially saying that it wouldn’t go to the International Monetary Fund (IMF), Bilawal said, adding that when they were forced to seek IMF’s help they struck a poor deal. “We said it then that the ‘PTI-IMF’ budget would create difficulties for the poor segments of the society,” he added.

Article 73 of the Constitution deals with the “procedure with respect to money bills”, which are only required to be passed by the National Assembly, the lower house of parliament.

These recommendations, however, are not binding for the National Assembly and it can approve a money bill even without considering it.