Running out of options: The state of our telcos 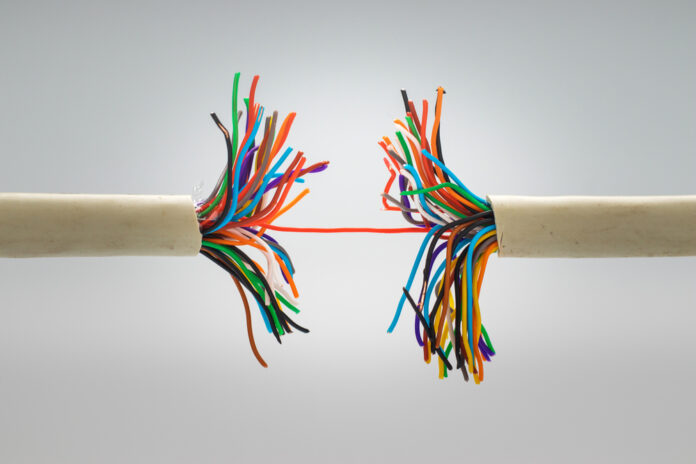 Over the past few years, the telecom sector has been facing the challenge of deteriorating profitability. Sustainability issues haunt all major operators, and a sense of desperation is prevalent amongst the industry players. Though the industry looks at the regulator, hoping it pulls a rabbit out of the hat, companies must introspect and innovate to overcome challenges.

There are, however, a few options at hand for the government and the Cellular Mobile Operators (CMO) to fend off the looming crisis. But what is the likelihood of those steps materialising?

Now about those financial results. Recent financial results announced by the sector paint a pretty grim picture of the gravity of the situation as industry-wide revenues took a toll while high operating costs pulled the plug on profitability. Amir Ibrahim, CEO of Jazz,  in a recorded video message, commented on the situation, “It is the first time in our history that revenues have fallen, in dollar terms, for four quarters straight when compared to the previous year.”

However, Jazz is faring far better than its competitors which are not just experiencing falling revenues, but are posting huge losses. Ufone, for instance, posted a loss of around PKR 8 billion, single-handedly converting PTCL’s bottom line to negative.

The situation for Telenor is also bleak. The financial results from operations during the second quarter of this year were negative. The Earnings Before Interest Tax Depreciation and Amortisation (EBITDA) experienced a decline of 15% as operating costs increased by 30% due to the devaluation of currency and high energy costs. This triggered an impairment event which resulted in Telenor’s parent company writing down the recoverable amount of assets in Pakistan from $850 to $600 million. (Read more about it in Profit’s article: Telenor Impairment: Has the group lost hope?)

As per Jazz’s investor presentation, an increase in diesel costs of around 169 percent year on year (YoY), and 41 percent in electricity costs YoY drove the energy cost of tower operations, an important component of the telco’s infrastructure. (Read more about it in Profit’s article: Telcos Energy Concerns: Unnecessary Whining or a Genuine Problem?)

“The increase in withholding tax from 10% to 15% on 16 January 2022 and the reduction in mobile termination rates from PKR 0.70 to PKR 0.50 were key headwinds, slowing revenue growth in the quarter,” the presentation further added.

As per the PTA, Mobile Termination Rate (MTR) is the price that a Cellular Mobile Operator (CMO) charges to another mobile operator for terminating its off-net calls on its network. For instance, if a Ufone user calls a Telenor user, then Ufone will pay Telenor termination charges for facilitating that call.

The net effect of this would be greater for Jazz compared to smaller players as it has a larger customer base, therefore, more opportunities to charge other operators.

Further, the interest rate hikes have also added to the Telco’s vows. For instance, Ufone financed its purchase of spectrum last year by availing a long-term debt facility. Further, Jazz has also increased leverage as financing through equity is expensive especially in a country like Pakistan where the risk premium is extremely high.

As per PACRA, “Consequently, in an effort to curb demand and inflation, a restrictive monetary measure in the form of an annual policy rate hike of 675 basis points had to be put in place in FY22; MPR climbed from a constant 7% to 13.75% from FY21 to FY22. The new fiscal year (FY23) began with a further 125 basis points increase in the policy rate to 15.00%.”

The credit rating agency has estimated that the interest rate hikes over the last year alone have created an incremental cost of around PKR 19 billion for the telecommunication sector.

Further, the telco’s ability to absorb these shocks is compromised due to the fact that the topline growth has historically been slow, increasing at an average rate of around 4% over the past five years. 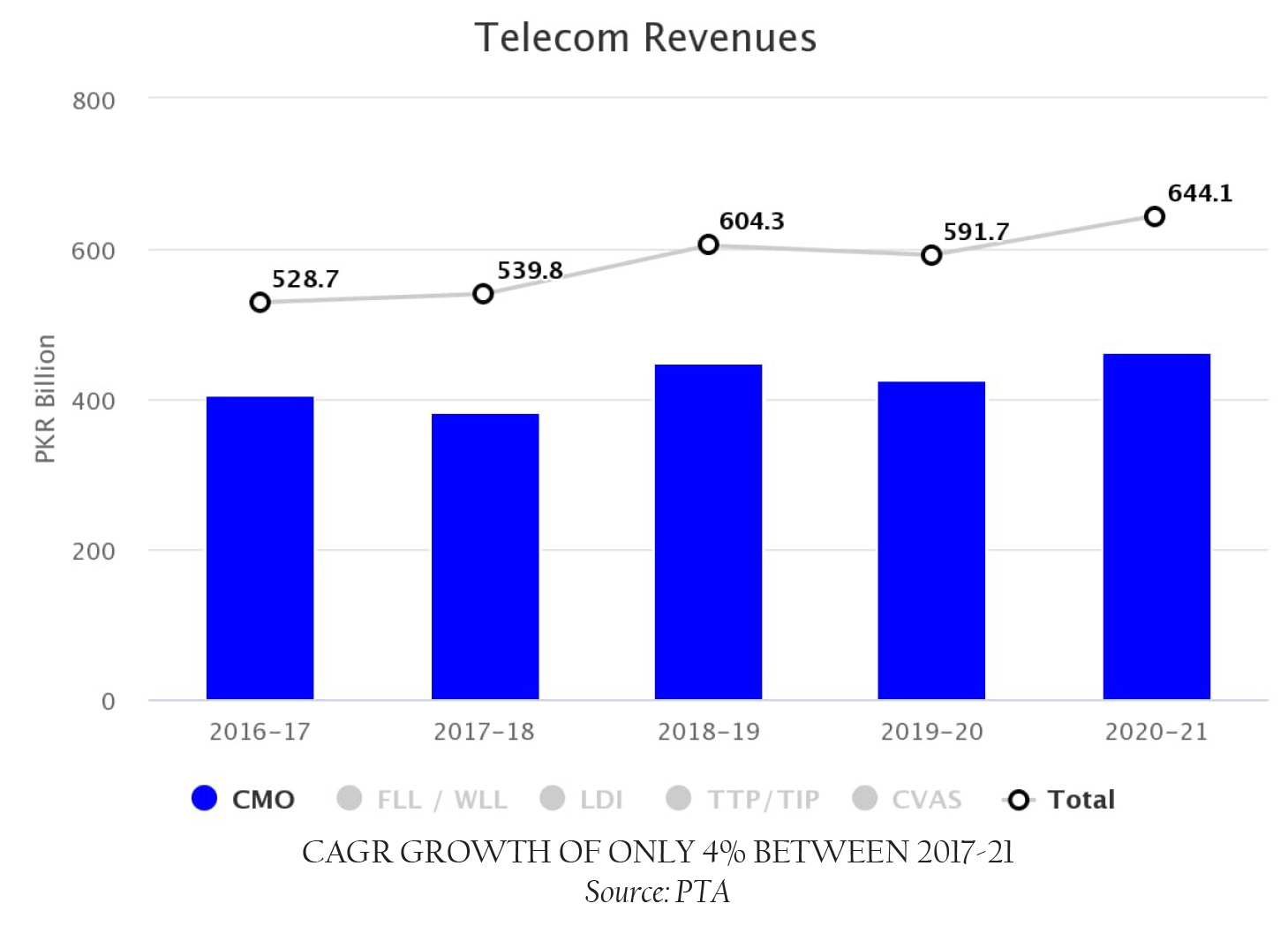 There is a consensus amongst the industry that the average revenue per user (ARPU), which is around $1, needs to increase manifolds for the survival of the Cellular Operators. There might be some relief on that front after the recent tariff hikes by the CMOs. In India, the tariffs were revised upwards, back in November last year,  which translated into industry-wide growth in ARPU.

Yet, this won’t be enough to see a turnaround in Pakistan’s telecommunication sector. There is a limit to rate hikes and excessive hikes might undermine future growth potential. Further, for Jazz, rate hikes need to be pre-approved by the regulator as the company is categorised as a significant market player after the acquisition of Warid.

Also, a major pain point for the sector is the spectrum and licence fees. There are three aspects of it that the players sought relief from; the spectrum being priced in dollars, high spectrum price (almost doubled when compared to 2004) and a small window of five years to pay the fee.

Comparable economies in the east and India are some of the examples that are quoted when presenting the case for spectrum fees in PKR. Further, the industry has asked to extend the licence payment duration from 5 years to 10 years.

Irfan Wahab, CEO of Telenor, in an interview with Profit, earlier this year, stated, “If we consider the sustainability of the business, our key cost elements are in U.S. dollars which is insane for a country like ours. It made sense back in 2004 when we entered the market as an international investor, but now we are a player here. We are earning here. Our customers are paying us in rupees.”

“You cannot pay your annual licence fees and your spectrum fees in dollars, especially, in an environment, where the dollar has rapidly devalued.” He added.

However, the demand for a significant reduction in spectrum price and a shift to pricing in PKR is unlikely to be met. The reason for this is a simple one, Pakistan, like many other frontier markets, relies on these one-off dollar payments to bridge the balance of payments gap. Further, in the present economic situation, the government is likely to prioritise short-term financing goals over long-term growth.

Yet, a demand of the sector that the government can possibly meet is the suspension of USF and Ignite contribution. As per the regulations, all CMOs contribute 1.5% of their gross revenues to Universal Development Fund and 0.5% to Ignite fund. In the opinion of officials associated with the sector, suspension of contributions for two to three years won’t affect the activities of the aforementioned funds as sufficient reserves are available. However, it will have a positive effect on the telcos’ bottom line. For instance, a suspension of contributions can improve EBITDA for Jazz alone by around 4 percent.

However, the telcos need to introspect as well. They have been slow to innovate which is now coming back to bite them. But, off late, the major players have acknowledged the need to be dynamic and are pursuing a 4G multi-play strategy, meaning an operator shouldn’t just remain a pipeline, but a destination as well for its customers. Users should spend more time on the network by using its digital apps thus, generating incremental revenue. 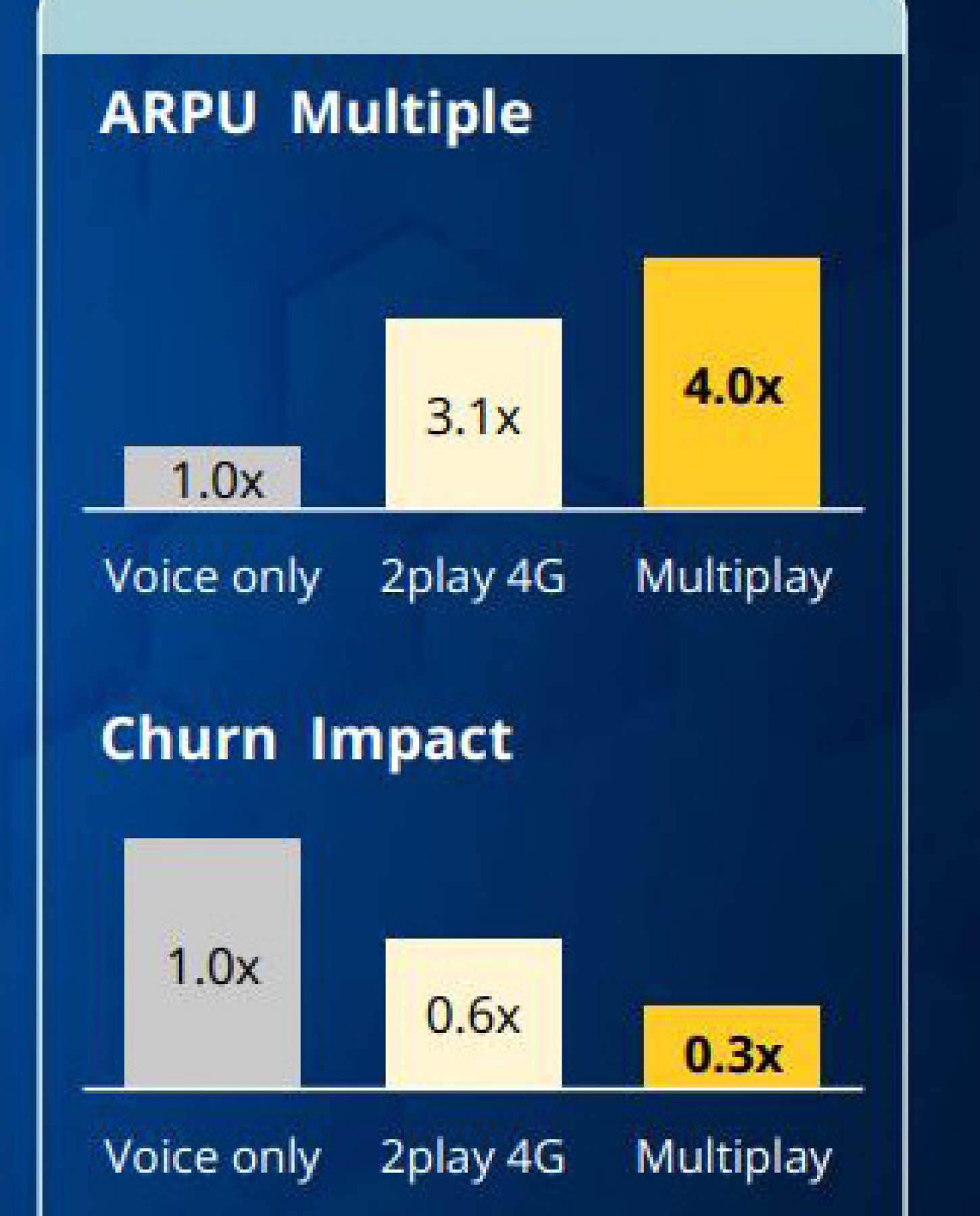 “In our quest to become a platform player, we have launched Mini App program and Open APIs to further develop the digital ecosystem in the country. We want to position ourselves as a platform where other parties can integrate with us and create new value with a seamless payment layer available on our platform. With strong payments capabilities at the core, we aspire to leverage the platform business model approach and be the lifestyle companion app/ Super App.” M. Mudassar Aqil, CEO, Telenor Microfinance Bank/ Easypaisa.

Further, there needs to be some serious deliberation when it comes to consolidation in the sector. Jazz has outperformed other players consistently and has managed to be profitable even in times of crisis as it scaled at the right time by acquiring Warid.

“There’s a huge degree of mergers and consolidation which has happened in every major market. When I was working in the US, there were 15-16 GSM operators and now there are only three. Also, look at our neighbouring countries like China, a market that has so many resources. They are adamant about not rolling out more than 2 networks on 5G. So you need scale in this industry and that’s why I think consolidation is important for any healthy market.” Irfan Wahab told Profit in an interview.

Yet, it all comes down to the user base. Growth in the subscriber base needs to be the primary goal as it will be the driving factor for everything else mentioned in this article. However, the regulatory framework has kept that from happening. Import restrictions on key raw material for smartphone manufacturing and high taxation has kept the smartphone penetration low, which is a serious threat to the Telecom sector’s 4G multiplayer strategy, 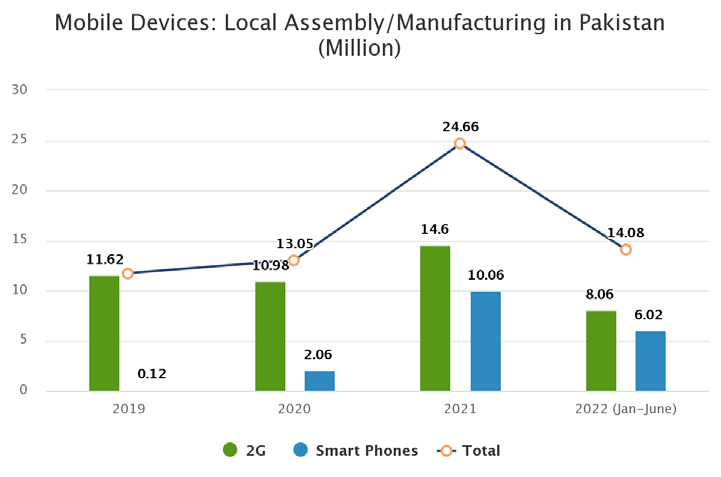 Pakistan is already in the lower echelons when it comes to digital inclusion. The current state of affairs is likely to aggravate this problem and can push the country into the digital dark ages.