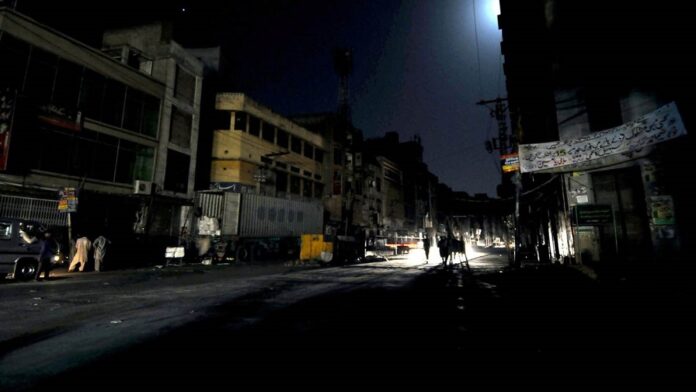 ISLAMABAD: There was massive load-shedding all over the country on Tuesday after power was restored late Monday night following a national power outage. The power minister informed the public that consumers would have to face “limited load management” over the next few days as the government scrambled to bring 10,100 megawatts of coal and nuclear power plants back online.

Industrial consumers will remain unaffected, however.

Addressing a press conference on Tuesday the Minister for Power Division Engineer Khurram Dastgir announced that the entire power system has been restored all over the country. However, there would be a shortage of electricity and a “limited load management” will continue for next 48-72 hours across the country for all categories of power consumers except industrial consumers. “The coal and nuclear power plants require 48-72 hours for restarting power generation and for synchronization with the system,” Dastgir said.

“During the next 48-72 hours, power shortfall will persist. However industry will not experience power cuts as per the policy of the incumbent government, while the rest of the power consumers will bear the brunt of electricity load-shedding.”

About yesterday’s major power breakdown in major parts of the country, the power Minister said that there was a “delay in synchronization between Tarbela and Mangla power plants. However, the technical problem has been fixed now with the help and support of the Power Division, WAPDA and Water Resource Ministry and the electricity system was restored. The entire transmission system remained safe and no incident of any damage was reported during yesterday’s country-wide power breakdown.”

Dastgir further said that January nights have the lowest electricity demand in a year and it dropped to 8,615 megawatts on Sunday night and when we ramp down the system with the decreasing demand, we turn several power plants off, he said, adding however, the reason behind the blackout was not yet fully known.

Dispelling the rumors about the shortage of fuel, Dastgir categorically said that there was no fuel shortage in the country and the power system was restored due to the availability of fuel. Earlier, Prime Minister Shehbaz Sharif also announced the formation of a a three-member committee under the leadership of the Minister of State for Petroleum Division Dr. Musadik Malik to probe the incident.

Criticising the former government of Pakistan Tehreek-i-Insaf (PTI) for not investing in the transmission and generation system of the country, Khurram Dastgir said that no investment was made during last four years to upgrade the transmission system to meet the increasing demand and due to this some parts of the country had experienced a power breakdown few months back . The installation of 20 year old conductors in the sensitive power plants during the PTI government tenure had caused this limited power breakdown, he added.

Later in a tweet, Dastgir said that all 1112 grid stations of the country had been restored while 6,600 MW coal and 3,500 MW nuclear plants are estimated to take 48 to 72 hours to restart. And, until these plants are made operational, there will be limited load management except for industrial users. The power division was working hard to restart all plants, he said.

It is pertinent to mention that despite the announcement made by the Power Minister that the entire power system has been restored, a large number of citizens across the country have been found complaining about the hours-long power load-shedding being made in their respective areas.