Busting business myths one bite at a time 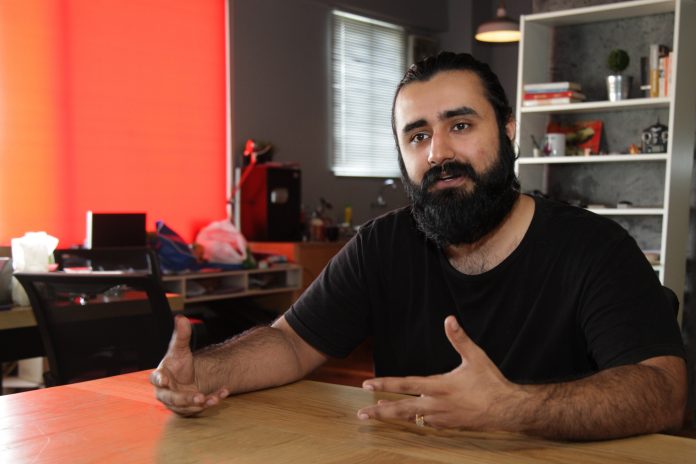 In 2014, a LUMS graduate along with his two friends decided to experiment with a business idea without following all the textbook commandments for a startup. Without any market research, business plan or feasibility study they bought a fryer, a hotplate, a signboard and a counter, and launched a burger joint.

“We’re trying to sell burgers in a ‘Pakistani way’.” Those are the exact words Gohar Iqbal, co-founder of a local burger joint – Johnny & Jugnu, utters as he describes the eatery that has wooed burger-lovers across Lahore.

Launched in 2015, Johnny & Jugnu, is the brainchild of Gohar Iqbal and Syed Umair Hasan – graduates of the Lahore University of Management and Sciences (LUMS). Also on board the project is Dr. Adnan Zahid, an assistant professor at the alma mater of Gohar and Umair.

The idea of a burger joint was born a week before Gohar and his partners actually started working on it back in 2014, right after his graduation. With no market research and feasibility report, Gohar and his team launched its first outlet in October last year in a locality called Krishan Nagar.

The decision to start out small was intentional as Gohar says he wanted to keep his ‘laboratory of business’ away from central Lahore, home to the city’s big hawks. “Krishan Nagar was a place where young boys played soccer in cricket grounds and burgers were more in demand than chicken tikkas,” he says sharing the obvious irony. “The idea was to learn, to try and experiment in a locality which was cheaper than the rest of the city and also hosted a population we thought was fond of burgers.” To top it off, Gohar says they only started with a capital of Rs 300,000.

That outlet, however, was shut down in 2016 and moved to Defence Housing Authority – an upscale locality in Lahore, to cater to a growing demand of their product, followed by another branch in Johar Town.

This Lahori burger joint is much like those that have sprung up over the past decade in Karachi – the economic hub of the country. Like JJ, Burger Shack and Burger Inc. also don’t offer a sitting area for their customers. This, according to Gohar, is to make sure that their costs remain low and allow them to sell good quality burgers at affordable prices. And that does not seem to affect their popularity among customers, who not just celebrate their birthdays standing outside the outlet but also pack away some saucy goodness for eager friends as far off as Dubai.

But this meticulous focus on brand image, while trying to strike a balance between high quality and low prices, has not left the business very profitable. Claiming to have one of the lowest profit margins in the burger joint industry, Gohar says Johnny & Jugnu makes a meagre amount of profit. However, he says this is not a problem. For now Gohar is content with earning a low profit. Their primary focus remains on building a brand image instead of maximizing profits. Gohar says that Pakistan’s image has been tainted globally in the recent past with the international media labelling the country as oppressed, violent and extremist. The owners of JJ wish to set that straight and use their food brand as a means to highlight the positive side of their country.

Offering five products: Fillet Burger, Zinger Burger, Patty Burger, Shami Burger and Tortilla Wrap, JJ’s cheapest burger would cost you Rs260 and can go up to Rs330. And with a deal that includes fries and drink, it can cost you slightly above Rs500. But what’s truly special to the outlet is their range of homemade sauces that the outlet takes great pride in. The sauces are advertised by the team as the ‘top six contenders for the greatest sauce ever’ on their Facebook page, which currently has over 25, 000 likes.

“We lose approximately a thousand customers each month for not serving beef burgers,”

The recipe for each of the sauces offered by Johnny & Jugnu is closely guarded but not without the realization that the secret will not remain forever. Initially all JJ recipes were hand-prepared by the owners themselves but now, some members of the workforce have been let in on the secret.

JJ has introduced sauces as their specialty and Gohar recalls instances when their employees were offered money for their recipes. “If recipes of leading food chains can get leaked and replicated, so can ours,” Gohar concedes. “That is the reason why we promote the brand and not the product, for the brand is Pakistani while the product has been synonymous with Western culture for very long.

But the hardest decision for JJ was to launch their Shami Burger –a popular roadside snack, instead of a beef burger – the ultimate want of burger enthusiasts. “We lose approximately a thousand customers each month for not serving beef burgers,” says Gohar. Defending the decision, he insists that the launch of Shami Burger was the right move and in the long run will help build the brand image that the owners are looking for. This approach was also reflected in its recent advertisement on social media publicizing its shaami burger. The ad which is also featured on their Facebook page was produced by an ad agency that caters to a ‘purely local’ market, exactly what Gohar and his partners wanted.

Majority of the supplies are locally produced or homemade, with the exception of French fries which are imported from South East Asia or Netherlands. The payable turnover ratio each month is four times, making it a weekly payment which is upfront and which keeps the suppliers happy.

What is strikingly different about this particular eatery is its human resource management, something which initially posed challenges to the founders. This, Gohar recalls was due to underestimation on their part of the investment and the training required for maintaining quality. At JJ, human resource management is entirely decentralized, although there is a chain of command and specific job descriptions when it comes to performing tasks.

“The only competition I’m worried about is the mentality that Pakistanis cannot produce quality food like international brands.”

The hiring or firing of an employee is the prerogative of the council of employees. Every employee is a part of the council and has a voting right – one vote for each person, including Gohar himself. Every month a meeting is convened, wherein the performance of all the employees is gauged. Rewards are given out to high performers while a hearing is initiated against those who underperform allowing them to defend their case.

“We have very high quality standards when it comes to making the product, hence we cannot afford any lapse on part of our employees,” says Gohar. “I have delegated the hiring and firing, performance evaluation to my employees simply because I cannot do everything everywhere.” Gohar explains the rationale saying that it motivates his employees knowing that they are part of a family, and in command of their own future at the organization.

While the food they offer is not Pakistani per se, but the image of the brand, from its name to one of its most popular shaami burgers is. As for competition, Gohar is clear about who and what he is competing against. “The only competition I’m worried about is the mentality that Pakistanis cannot produce quality food like international brands.”

All three partners have one dream – to alter this very mindset and make Johnny & Jugnu a global brand name which every Pakistani can be proud of.

Pakistan all set to sign trade pacts with CARs: Dawood