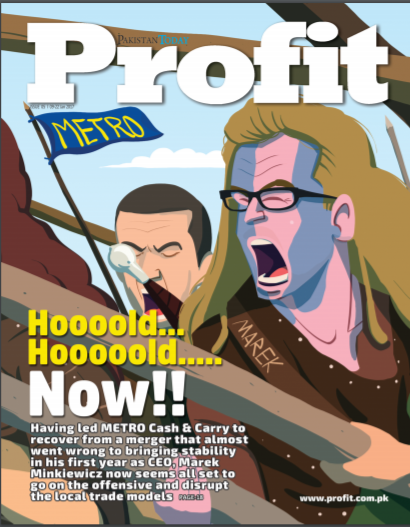 One of my all-time favorite movies has to be Braveheart (1995). The movie had many powerful scenes and the one that we have depicted on our cover is when the English cavalry approaching in slow motion were bearing down on William Wallace (Mel Gibson) and his fellow Scots. You could feel the tension as the horses drew nearer all the while William Wallace shouts, “HOLD… HOLD… HOLD”  till the cavalry came extremely close. And judging the right time, Wallace shouts “Now”. You might be wondering what has the illustration of William Wallace and this scene got to do with our cover story on Metro Cash & Carry (MCC).  Using the scene as an analogy to depict Metro Cash and Carry’s team which has been on Hold in terms of new store openings for the last 8 years now seems all set to go all out. Their plans to open new Metro stores in unexplored cities, launching convenience stores and last but not the least to enter the world of e-commerce are all great ideas. It now depends how well they are executed because that is where the devil lies. The closing paragraph of our cover story nicely sums it up. “ All the plans that Marek talks about are exciting and look good on paper. But they are ideas. Implementation is where the magic happens. Large organisations like Metro, regardless of how no-frills they gear themselves out to be, are going to be sluggish in comparison to new, nimble ones like, say Daraaz. If Marek’s Metro can be both big and fast, we’re certainly looking at exciting times ahead.”

Another important point that Marek Minkiewicz mentions is that MCC is the largest tax collector for the Government. He was obviously referring to the 17% sales tax that MCC charges on all the items it sells to its customers. This, they charge on the government’s behalf and deposit it in the FBR’s kitty at every month end. They even ensure that all their vendors are also sales tax registered. This is not all, they also deduct withholding income tax from their suppliers payments and in a country like Pakistan where vendors usually add the amount of Withholding tax to the final price,  means that Metro’s buying becomes automatically very expensive. I can personally vouch for this since one of this magazine’s  sister companies is a vendor for Metro’s printing needs.  The irony is that other wholesale markets and most retail outlets never provide the Sales tax invoice to their customers thus gaining an extra 17% to possibly pass on to them in the form of discount. Taking this into account it is commendable to say the least  that MCC has still been able to successfully compete as a low cost provider in both the B2B and B2C formats. To know the details of how they have managed to run such a tight ship, please go to page 18 of this magazine.