After failing to find an appropriate place to enjoy tea Schanilla Awan along with her partners decided to open a Dhaba where everyone, especially women and families, could enjoy tea& snacks 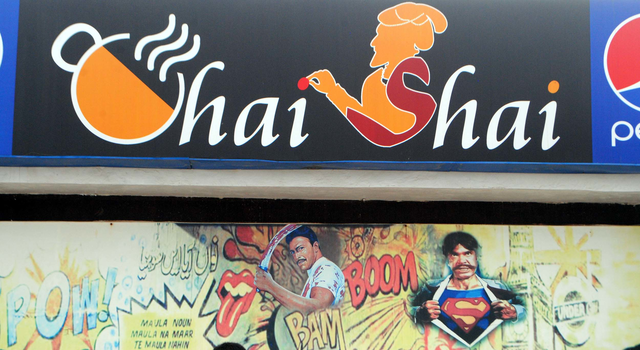 Just as he finished an interview at Chai Shai, a tea shop on the main Sea View Road, Mustafa Kamal encountered a group of young boys, a couple with their toddler, and two middle-aged women, all of whom have been eagerly waiting for the ex-mayor for a photograph and chat. Kamal stopped to greet and submerged in the crowd that had come to merely have a cup of tea at the place.

Such encounters – where the general public meets businessmen, celebrities, politicians and other elites – are becoming more common these days because of places like Chai Shai and Chai Wala that are essentially roadside cafes (dhabas) have opened in the upscale neighbourhoods of Clifton and Defence over the past couple of years.

Previously associated with the members of working class, dhaba culture has now become a trend among Karachiites; it is symbolic to at least have a selfie in front of the truck art or filmy graffiti adorning the walls of these cafes. They have become hot spots for the likes of Mustafa Kamal who have largely remained out of public access.

Today, the trendiness of these dhabas and the casual ambience they provide is something that celebrities, politicians, and businessmen enjoy equally as a common people – and this is what Schanilla Awan, one of the four partners at Chai Shai, says brings famous names to the tea houses.

“We see actors, cricketers, and politicians coming in here to get rid of the protocol they always have. People go to them to take pictures and talk to them, but usually nobody bothers them and this is what celebrities enjoy the most,’’ says Awan. The list of renowned names who have visited her dhaba, includes – but is not limited to – politicians Zulfiqar Mirza, Fehmida Mirza, Asad Umer, businessmen Salman Iqbal, owner of ARY network, Sadruddin Hashwani, owner of Hashoo Group, and sportsmen like Shahid Khan Afridi.

After Karachi operations’ fruitful results last Ramadan, Karachiites found a new place for Sehri (pre-dawn meal) namely Chai Shai, that offered them a combination of cheese paratha and a hot cup of cardamom tea to enjoy in the open air with their family. The parathas did not end on cheese, tea didn’t finish on cardamom and the dhaba businesses certainly did not close down on chaand raat. The love for chai dhaba continued to flourish in the hearts of Karachiites and so did the business, which started among friends to eventually grow in the heart of Karachi itself.

Awan recalls the days when she used to go for tea at night with her friends and the females had to sit in the car as the place was ‘inappropriate’ for them. ‘’One day we thought that there should be a place where families and girls can also come in to enjoy a cup of tea. The next day we started looking for places; we didn’t have a feasibility plan or anything, we just went out for it,’’ Awan laughs while telling the ‘inspiration’ behind the idea that transformed into a functional dhabba some ten days before Ramadan last year. This worked out well for the group and Chai Shai along with other similar dhabas started receiving female customers in a large number –shifting traditional customer base of the tea houses.

“We usually come here in the evening to have a talk over a cup of tea. Although there are other cafes and restaurants, but females do not have many open-air options, and these places provide us with that,’’ said Nazish Khan who was there with her female friends – one of the many girls-only groups that these dhabas have welcomed.

Initially, Chai Wala and Chai Shai were the only two that wanted to take the tea home. However, as more people started ‘checking-in’ on Facebook at these places, others such as Lollywood Café, Chai Master and Café Clifton also jumped in to serve the pizza paratha, Nutella paratha, chocolate chai, and Kashmiri chai with their own unique tinge. Today, on Chota Bukhari only – the birthplace of Chai Shai and Chai Wala’s – seven dhabas are functional and many others are serving the traditional cuisine all across the city including two in Gulshan e Iqbal, one in North Nazimabad and another at Tariq Road.

Chai Shai, that Awan says clicked unexpectedly, also expanded from one outlet to three in South of the city and introduced full-fledged variety in their chai paratha menu in a year due to the overwhelming response. Awan and co. soon plan to go to the ‘other part of the city’, and introduce breakfast menu at the sea view outlet.

The rich and famous, however, are not the only visitors at the chai dhaba. Muhammad Faizan, manager of Chai Shai sea view outlet thinks their brand name and corniche location attracts customers from all over Karachi. ‘’Since it’s the beach, we see all kinds of people coming in everyday. However, it is families mostly who like to have a reasonable outing at sea view.’’ Awan also endorses the statement when she accounts that ‘pocket friendly’ menu was another thing that she and her friends wanted to introduce.

Although these fancier dhabas are pricier than a conventional small one – tea at a regular dhaba goes for Rs 25- Rs 40 max while it goes for Rs 80 – Rs 100 at a place like Chai Shai for example. The premium is justified by the ambience and environment these new places provide and customers are more than willing to pay it.

Soothing fragrance of tea, an unnoticed yet noisy bustle, and comfort food – paratha – served hot in changair (traditional plates) well defines the scene of these open air tea stalls. Faizan says that as many as 100 people come to his outlet every day, and according to Awan on special days like Ramadan, world cup matches, and public holidays the turnover is higher and it’s difficult to accommodate so many people at once; however the customers do not mind waiting for hours to have their chai-paratha meal.

The claim becomes valid upon visiting the ‘tea stalls’ after 10 at night. Seats filled to the brim, waiters rapidly serving orders, families, friends and co workers engulfed in chit chat over hot tea and paratha prove Karachiites’ love for these dhabas.

‘’I belong to Karachi; its sea and sunset is the best combination a Karachiite can ask for, I am definitely visiting again for the sake of tea and sea,’’ Kamal – who was there for the first time – said while standing among his fans who’re now used to of finding Kamal and the likes at chai dhabas.

Whether it’s a place for females to peacefully hangout, families who want pocket friendly outings, business tycoons who want simple pleasures of life, or politicians who like to mingle among the common masses without security protocol, these dhabas have changed the portrayal of how chai dhabas looked like a couple of years ago and welcomed customers from all walks of life making ‘Mehmood o Ayaaz’ sit in the same row.