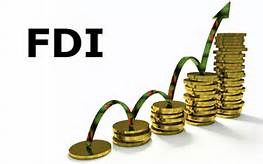 Foreign direct investment (FDI) registered an increase of 12.4 pc year-on-year in the first three-quarters of 2016-17 primarily due to funds flowing in from China.

According to The State Bank of Pakistan (SBP) on Monday, the country received $1.6b  in July-March against $1.42b a year ago.

As the development projects kick off under the China-Pakistan Economic Corridor (CPEC), foreign direct investment (FDI) is expected to rise sharply. However, the year-on-year increase of just $176.4m in the nine-month period signifies that policymakers have been unable to attract significant foreign investors into the country.

FDI from China rose to $595m from $590m a year ago. Chinese investment constitutes 37pc of FDI inflows.

Pakistan receives the least FDI in the region, despite the existence of numerous attractive investment opportunities in power, real estate, and services sectors. Resultantly, the country resorts to borrowing from commercial market in order to finance rising interest payments.

The escalating trade deficit of $23b which has already reached a historic high continues to pose a threat to the external sector and is making it more challenging for the country to continue fulfilling its foreign obligations.

The country’s foreign exchange reserves have been declining since October 2016.The trade deficit will further widen the current account deficit despite the government’s claim that the proportion of machinery in total imports was over 40pc.

The government believes the import of machinery will improve the country’s production capacity and ultimately increase exports. But exports have been declining for the last four years.