All efforts being made to bring Paypal to Pakistan: Khurram Dastagir 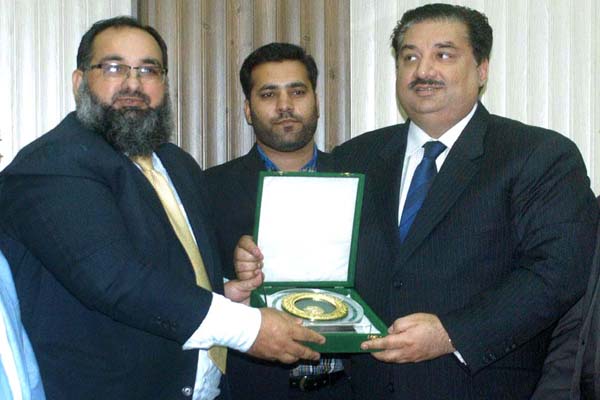 Federal Minister for Commerce Engineer Khurram Dastgir Khan said on Monday that promotion of trade and exports was top priority of the country, as the government was successfully removing all the hurdles from smooth way of national economical stability.
He stated this while addressing a meeting of Sialkot business community at Pakistan Sports Goods Manufacturers and Exporters Association (PSGMEA). The Association Chairman Khurram Aslam presided over the meeting.

Federal Minister said that PML-N government was making effective and positive efforts to boost country’s trade and exports by taking business community into confidence and ensuring the continuity of government’s effective economical, trade and export policies. Government was well aware of the business community’s problems and making strenuous efforts to resolve them amicably, he added.

He announced to facilitate Sialkot exporters at maximum level for arranging foreign trade delegation, besides encouraging them to participate in all the international trade fairs and exhibitions including International Trade Fair to be held in January 2018 in Munich-Germany. Federal Minister said government has made Pakistan a peaceful, prosperous and economically stable country by ensuring peace in Karachi and eliminating terrorism, saying that this indicated the success story of PML-N government’s positive economical policies, which have put the country on way to economical and political stability. Today, Pakistan is more peaceful, economically stable, prosperous and enlightened, as government is successfully reducing energy crisis.

He said government would soon organize awareness-raising seminars on CPEC project in all the main industrial cities, asserting that grand project of CPEC was opening the possibilities of promotion and strengthening mutual trade ties and business activities between businessmen of Pakistan and China. Federal Commerce Minister said that government was providing uninterrupted electricity to the industry, and pledged to provide further cheap electricity to them with completion of several new power generation projects. He said, government is implementing its top agenda of economic growth under dynamic leadership of Prime Minister Nawaz Sharif.

He said Pakistan was negotiating with Ali Baba business company and discussing with the concerned officials to reduce the registration fees for the Sialkot businessmen. Engineer Khurram Dastgir Khan said that government was also making all out sincere efforts to bring international PayPal and other payment gateways to Pakistan very soon, saying that international payment gateway PayPal will start its regular services in Pakistan very soon, as the necessary legislation was being made here under the supervision of State Bank of Pakistan (SBP). He also pledged to provide advanced drugs checking scanners to all dry ports in the country, adding that government is taking a very lenient view for exporters and export sector.