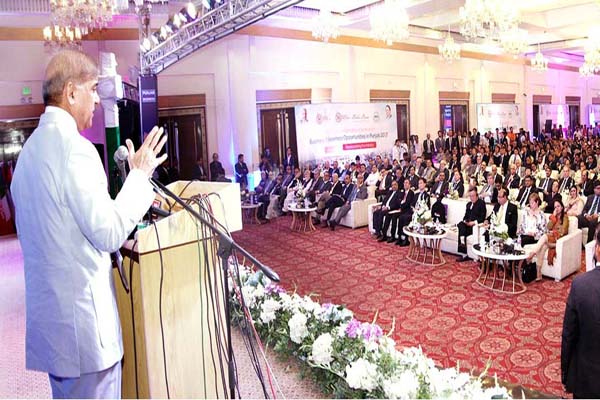 Lahore: Punjab Chief Minister Muhammad Shahbaz Sharif has said that Almighty Allah has granted a great boon to Pakistan in shape of China Pakistan Economic Corridor (CPEC), as
it is a golden opportunity to move further.

“Taking full benefit of this golden opportunity is the collective responsibility of all of us as this is a great project of turning hopelessness into hope and disappointments into joys and happiness.We will have to make this project a success with our hard work,
commitment and passion. It is our responsibility as well as an obligation,” he added.

He made it crystal clear that there was no room for politics over projects of national importance, and added that they should create a symphony, instead of any jangling discord. “If we did not take benefit of this mega project, then the future generations, as
well as the history, will not forgive us. If we did any politics over the projects of national importance, then the history will never forgive us,” he mentioned.

The Chief Minister expressed these views while addressing the inaugural session of second international seminar titled “opportunities of investment in Punjab” under the aegis of Punjab Board of Investment at a local hotel, on Monday. Provincial Ministers, members of the parliament, representatives from China, Turkey, Europe, North America and 26 other countries, besides a large number of investors, industrialists and
diplomats, attended the seminar.

In his key-note address, Chief Minister Shehbaz Sharif said fast track implementation on the CPEC had been commended by China as well as the rest of the world, saying friends were happy, while the foes were unnerved and perplexed, over the successful implementation of this project.

The elements, he said, terming it as expensive commercial loans had been calmed down. These were not loans but an investment of China. He said, the whole nation would have to move further unitedly for the success of this mega initiative aiming at development and prosperity of the people and the nation.

He said a very transparent mechanism had been devised to implement upon the development projects under the leadership of Prime Minister Muhammad Nawaz Sharif, and this policy of transparency had been lauded the world over. “All the CPEC related projects are high examples of transparency, quality and fast track completions. I would request the national and international investors to move forward and take full benefit of opportunities of investment in Pakistan, especially in the Punjab, he said and added the Punjab government and other relevant departments would continue to provide every support and facility to the investors.

The Chief Minister hoped that this event would play an important role with regard to promotion of investment in the Punjab. He particularly mentioned holding of first seminar held in November 2015 on the same topic and said that proved very successful and helped promote national and international investment. He termed the investors as ‘masters’ and said that their investment helped boost trade and economic activities in the country, besides promoting lakhs of new job related opportunities, while, it also proved very beneficial to deal with poverty and joblessness issues.

He said a high level delegation had recently attended the Belt and Road Forum which held in China under the leadership of Prime Minister Nawaz Sharif, and said that this forum depicted the leadership wisdom, acumen and futurist approach of Chinese President Xi Jinping. “This project is harbinger of collective well-being of the humanity and no strings are attached with this project of development and prosperity. The Belt and Road
vision of the Chinese President is a vision aimed at development and prosperity, which is not limited to some selected countries, but is meant for the whole of the world. Anybody can take benefit of this project and all could take part in this journey of development and prosperity. CPEC is a fruit of this vision of Chinese President which will, first of all, benefit the people of Pakistan,” Shehbaz Shaif said.

He told the participants that CPEC projects were speedily being completed in the country and a huge sum of 36 billion dollars was being spent on setting up electricity projects. He said 1320 MW Sahiwal Coal Power Plant had started producing electricity and 660 MW electricity of this project was being included in the national grid in the first phase. This project, he said, would be completed in the next month which would help generate additional 660 MW electricity. He said 320 MW coal power project, which had been completed with an amount of 1.8 billion dollars,was the largest project and a reward of the CPEC Project which would benefit the people of Pakistan.

He said Zurlo Energy had made investment in solar project of Quaid e Azam Solar Park Bahawalpur and this company was installing 300 MW solar power plant there. He said that tariff of 200 MW electricity was 5.17 cent per unit while per unit tariff of 100MW had been fixed at 6 cents, which was minimum in the history of Pakistan. Similarly, British investors entered into agreement for investment in Punjab during the previous conference and today this project had been inaugurated, he said and added the British investment group Ashmore had made 70 million euro investment in a beverage project.

The Chief Minister said terrorism and fanaticism had damaged the national economy and obstructed the economic activities. Political as well as military leadership, including the whole nation, was fully committed to totally eliminate the menace of terrorism from the country, he said and added that Pak-Army, police, officers and jawans of law enforcement agencies, children and citizens had rendered invaluable sacrifices in war against terrorism.
The guest of the honor of the seminar and former diplomat of China Mr. Sha Zukang, in his address, said Pak-China friendship was unique. He said Shehbaz Sharif was a great friend of China, and economic cooperation between the two countries had been promoted due to his hard work.

He said unprecedented development had been made in Punjab due to the hard work of Punjab Chief Minister, adding that Punjab had emerged as developed and prosperous province of Pakistan. “We feel proud of Pakistan and the friendship with the people of Pakistan. CPEC is a great project of development and prosperity of Pakistan; and China and Pakistan are fully committed for its success,” he added.

Chinese Consul General Long Dingbin said China gave great importance to its relations with Pakistan, and Punjab Chief Minister Muhammad Shehbaz Sharif had played an important role in the promotion of economic cooperation between the two countries, adding that due to the strong leadership of Shehbaz Sharif, investment had been enhanced in Punjab and the participation of 300 Chinese investors in the seminar was a proof of it.

Turkish Consul General Sardar Deniz said Chief Minister Shehbaz Sharif had served the people of Punjab with full zeal and had done a wonderful job for providing facilities to the people. He said quite a number of Turkish companies were working alongside Punjab government, and more Turkish investors would invest in Punjab in the coming days.
President Pak-Turkish Business Council said that Pakistan had an emerging economy and the leadership of Prime Minister Nawaz Sharif had helped to strengthen the economy of Pakistan as well as enhancing economic cooperation between Pakistan and Turkey.
The CEO of Chinese Company working on Sahiwal Coal Power Project said that Sahiwal Coal Power Project was a landmark initiative which was going to be completed in a record period of 22 months, and added that this had been made possible due to the great leadership of Shehbaz Sharif. The completion of the project, in a record period of 22 months, was the result of Punjab Speed and Shehbaz Speed, he added.

The Country Director of World Bank in Pakistan Patchamuthu Illangovan congratulated Chief Minister Shehbaz Sharif for creating favorable environment in Punjab for investment, and said that due to his steps, the investment had enhanced in the province, and as a result the economy of Pakistan and Punjab had been strengthened. The World Bank had been working with Pakistan and Punjab governments and this cooperation would continue in the future as well, he said and termed as wonderful the initiative of Punjab government to provide technical training to 20 lakh youth.

President LCCI Lahore Abdul Basit and Finance Minister Ayesha Ghaus Pasha highlighted the importance of the seminar in their addresses.

- Advertisement -
Facebook
Twitter
Linkedin
WhatsApp
Email
Previous articleEconomic Survey to be launched on Thursday
Next articleAll efforts being made to bring Paypal to Pakistan: Khurram Dastagir