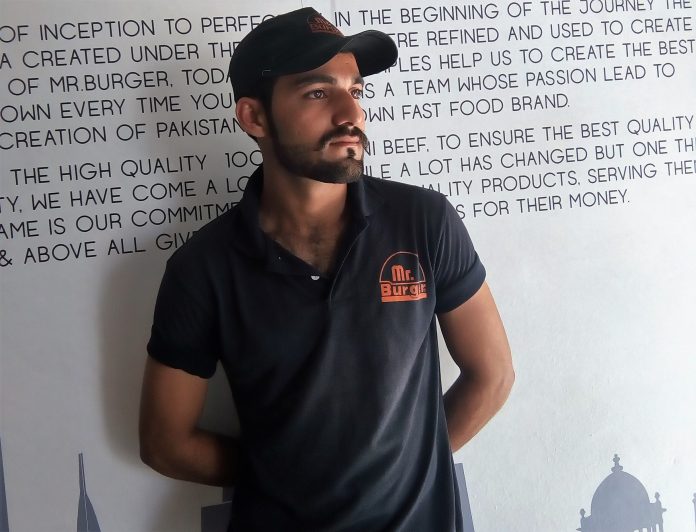 Tanveer Khan, a delivery boy at Mr. Burger, runs his made-in-China to the maximum bike in order to reach his customer before the meal in his backpack loses its freshness and hotness.

Also, he doesn’t want to hear complaint calls on his mobile from the staff at his branch or customers waiting for food at their houses. “When I am late for a while, branch staff or the customers start calling me, which makes me feel guilty,” said Tanveer.

Speed in a delivery rider’s job is everything otherwise they would be out of business. When he started working at Mr. Burger he didn’t know addresses and locations within the city but he only accepted the job because he was not getting a raise in his previous job at a superstore (Chase up ).

Though Tanveer got the rider’s job as he met the only criteria for the job at Mr. Burger that the candidate must have his own conveyance, the problem he faced was the lack of knowledge about routes and addresses of the city.

“Initially when I reached late at the given address, the customer would show their anger on my late arrival but I was good at making pretexts,” he tells while speeding up through streets of DHA Karachi to deliver the food on time.

His usual excuse to pacify the customer was to claim that his delivery bag was full of other orders and that he had to wait for his branch to prepare all the food and only then he could leave. In reality the bag contained only the one order for the customer he gave this explanation to. Relying purely on the confidence in his voice he would invite the customer in question to even inspect his delivery bag but, as tanveer put it was a “rare occurrence”.

While delivering he twists his bike’s accelerator to the possible limit and cannot even see how fast he is going minus the odometer that he has taken off purposely.

The only measure for his speed that he has is the traffic either side of his bike whizzing away. “Sometimes I try to beat those speedy cars to be on time,” he told me while I accompanied him on his meterless bike.

While his aim to reach each destination on time forces him to ride his bike dangerously, Tanveer heads nowhere in his career as this industry offers him nothing but commission of Rs30 under the head of petrol per order besides basic salary of Rs10,000. Tanveer and his fellow riders have no idea where they will be after 5 years, but they unfortunately have to make due with their current situation.

While delivering an order at a house in Popular Avenue DHA , an un-relaxed expression appeared on his face when he saw a servant coming out of the home to take the delivery.

Domestic servants especially watchmen are main rivals of Tanveer and his fellow riders because they deprive them of the tip which a customer pays them on delivery. “When a customer gives a tip, those servants keep it but it is actually ours to keep, we work hard and try our best to deliver food in the allotted time but don’t get the tip for good service at the end,” he said.

Tanveer Khan also dislikes delivering to Center Point, he says the tall building near KPT interchange is too far from Rahat Branch which burns his whole commission. “When I reach there a guard investigates who I am and where I am from, then an elevator takes you up to the floor and as soon you get out of it another watchman pops up and orders you to stop and get checked again.”

Tanveer is only allowed to take the specific order to the apartment and has to leave his bag with the security guard. The worse part is that residents at centre point do not tip, according to Tanveer.

As with the most of his fellow workers Tanveer too has little ambition.Upon being asked a simple question about his five year plan the group, including Tanveer pondered hard over it, and the best they came up with was that if they were able to secure a job with a big organization offering them Rs13,000 salary besides commission they would make the switch.

The job might be reasonable for the young boys who aren’t that educated but there are men in their 30’s who work as riders too. The reason Tanveer cites is a lack of technical skills and education, so a riders job, according to Tanveer, is a better alternative.

“I keep emphasizing on the importance of education to the young ones that work here as it is the only way they can get better jobs and exposure,” says Agha Muazzam Hussain General Manager at Mr. Burger.

Mr. Burger has a few success stories, one of them was Wasim who started his job as a rider but looking at his potential, the company transferred him to the lobby, then he was elevated step by step and was promoted as lobby in-charge. Then the company transferred him to the Kitchen owing to his product knowledge and subsequently promoted him as dispatcher and lastly he was posted as a cashier.

Mr. Burger has stories of people who progressed better than others but unfortunately not too many.

“Rider jobs do not have any career growth but neither do a lot of other desk jobs as well in the country,” said Maha Khalid Hassan, human resource expert at Career Counseling Portal Pakistan (CCP).

Tanveer also does now shy away from helping out his restaurant’s staff where need be. While smoking a cigarette at Rahat Branch he got a call for an order and helped the cooks prepare the order in time as they were short handed.

The business for riders is somewhat seasonal as well. Tanveer explained that on the occasion of Eid-Ul-Fitr the volume of orders increased and he would earn around Rs1000 a day in commissions and tips. However in slower months that figure would hardly reach Rs200-300.

Tanveer Khan worked in Dubai two years ago where he would earn more in three or four days what equals to his monthly salary here in Pakistan. He had to leave that life and come back here due to family issues. He started a job at Chase Up departmental store at Rs 8000 after which he shifted to Mr Burger for a better package.

Maha explained this propensity of people like Tanveer to shift jobs saying, “There is no loyalty to employers now either, this is probably the only way you can expect quick salary increases as you are in a position with a new company to contest for more salary to justify leaving your old employer. The opportunity cost of staying with an employer for years therefore goes up. Also motivation to work, more to learn and a different workplace environment (i.e. change) are by-products of doing this as well. All of which benefit the employee. We live in a day and age which is extremely selfish and self-involved. It’s a rat race, if you must. We have social media posts going around stating never be loyal to a company, it does not care about you either”

With the growing population of Pakistan that is uneducated due to a general lack of the government’s attention towards the education sector it is easy to understand why a majority of our population is not career focused. They prefer to switch odd jobs at the first sign of a bigger paycheck due to the lack of any mentionable skill set.