Socialism is a ‘dirty’ word in Pakistan: Kaiser Bengali 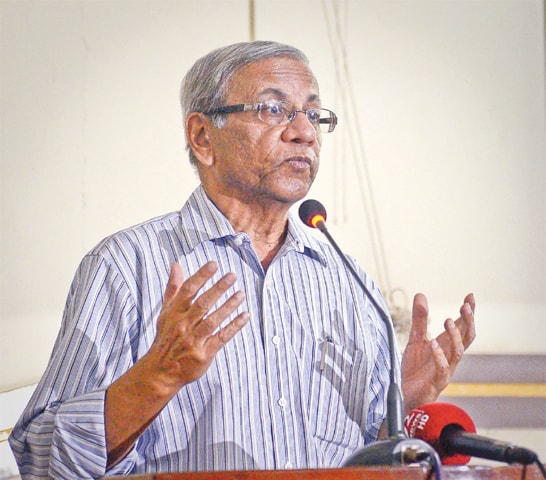 KARACHI: Pakistan’s renowned Economist Kaiser Bengali was amused to hear repeated praise of socialism from Wang Yu, Chinese Council General in Karachi and later told him that socialism is a ‘dirty’ word in Pakistan, during a moot, “CPEC – Prospects, Challenges and Way Forward”, held here Thursday at National Institute of Management (NIM).

“Mr. Wang Yu repeatedly praised socialism in his speech. I may tell him Socialism is considered a dirty word in Pakistan. People here may not be able to digest that socialism could bring such great changes in the society,” Bengali said.

Earlier, Yu literally showered praises repeatedly on ‘Socialism of Chinese Characteristics’ for the success of China. He also said that Pakistan and China have had helped each other in the past on different occasions and are iron brothers.

Bengali, although acknowledged Chinese for their immense progress in the international arena, however he was critical about CPEC and even said that a feasibility report, doing a cost and benefit analysis, was never prepared by Pakistan authorities.

“No cost and benefit analysis has been done. Environmental impact of CPEC has also not assessed, which is mandatory by law,” Bengali said. “I have questioned many government officials about the duty distribution of the Gwadar port but never got an answer. However, what I have come to know, is that Pakistan would receive only nine percent from it.”

“It is the duty of our government to provide security to all the people coming Pakistan either for working or as tourists. All foreign people are our guest. However, if the expenses on security of those people, which will bore by Pakistan, exceeds which would be received from that nine percent duties then what is the use of CPEC for Pakistan?” questioned Bengali.

“I am not against CPEC and I don’t doubt China’s intention. But what I want to say is that we have not prepared properly for CPEC and not bargained well because of incompetency of our government,” he said.

He also highlighted the issue that if Chinese products are offloaded in Pakistan in between Kashgar to Gwadar then it would destroy local industries.

He added that the money coming in Pakistan from China under the umbrella of CPEC are either loans or FDI and Pakistan would have to pay back as interest and profit respectively in dollar terms, increasing outflows. It would be a huge burden on Pakistan’s economy, which is already enduring a huge pressure on its deteriorating Balance of Payment (BOP).

China could have chosen Iran or Myanmar for CPEC, Mushahid Hussain Syed

Senator Mushahid Hussain Syed, who is the Chairman of Parliamentary Committee on CPEC, said that China could have chosen Iran or Myanmar instead of Pakistan to achieve what it has planned to do through CPEC.

“When US President Donald returned from a visit of China, a journalist described him as a humbled leader of a ‘declining’ super power,” Mushahid said.

He stressed on the big picture of CPEC and added that the concept of South Asia has been enhanced from few countries and now China and Central Asian Countries have also become a part of a ‘Greater South Asia’.

Mushahid said that the inefficiency on government’s part should not be considered as the outcome of CPEC.

“One cannot hold CPEC liable for inefficiency on the part of the government. If there is water shortage in Karachi or Gwadar, then it is not the outcome of CPEC. It has been the responsibility of the administration. CPEC will solve those problems in times to come,” he said.

Mushahid also criticized bureaucracy and elite class in Islamabad and asked them to shift their lenses to Asia. He alleged that Pakistan’s bureaucracy has been inclined towards the West and was unable to understand that 21st century belongs to Asia.

He further said that China could be a market for our agricultural products. “Our dates are better than the Middle East’s dates. China could be our target market.”

“Chinese labor market could not encroach upon our labor market. A labor’s cost per month in Pakistan terms is Rs 80,000 in China while we can have one in Rs 15,000 to 20,000 here. Which Chinese would want to work here for fewer bucks,” he said.

He added that due to rising cost of labor in China, many businesses would be moving their operations creating about 90 million new jobs in next five years and Pakistan could benefit from it.

Mushahid further said that China has brought 70 crores of its people out of poverty into middle-class in only one generation – which spans to only 25 years. China has planned to achieve zero poverty by the year 2020.

He further said that CPEC consists of a number of projects. The exact number is 39. There is a different feasibility for each of the project. There are FDIs and government’s soft loans, with an interest rate of 1.5 to 2 percent. And then there are also grants (gift) from China.