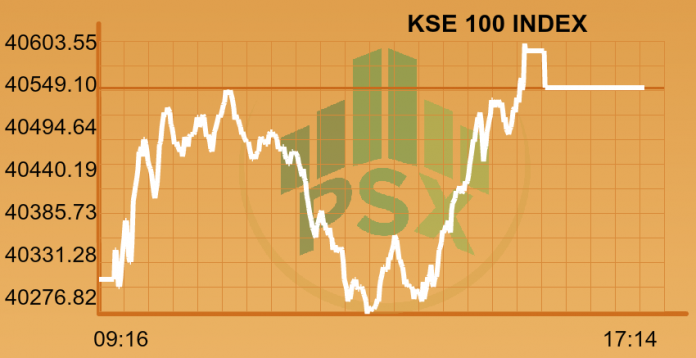 LAHORE: The benchmark KSE 100 dropped below the lowest value of the year, 40,316.93, trading on Tuesday. The index has been contracting from historical highs of 53,127.24 with factors like reclassification by MSCI, shaken political environment and uncertainty over economic future playing their part. The excitement revolving around investments from CPEC seems to have been overshadowed.

The market volumes were not encouraging either. Market participants remained distant from the trading floor and total shares exchanged were recorded as 101.80 million. Right shares of Unity Foods Limited (UNITYR +26.60 per cent) caught most eyes and ranked on top of the volume chart with 12.98 million shares traded. The script, Unity Foods Limited (UNITY +4.99 per cent) also hit the upper circuit breaker.

TRG Pakistan Limited (TRG +1.84 per cent) ranked second on the chart, volume 7.33 million, and contracted its losses for the year to 16 per cent. Pak Elektron Limited (PAEL +2.50 per cent) followed with 4.93 million shares. The script deflated to its 52-week low of Rs 54.70 along with the index taking the capital loss for the year to 21 per cent.

Oil and Gas Exploration holding the largest chunk of market capitalisation cumulatively moved higher by 1.20 per cent. Contrary to the benchmark index and numerous scripts on it, the sector has appreciated during the year. Mari Petroleum Company Limited (MARI +0.26 per cent) appreciated 48 per cent in the last one year, Pakistan Oilfields Limited (POL +0.55 per cent) inflated by 46 per cent in the same, Oil and Gas Development Company Limited (OGDC +1.69 per cent) added 11 per cent and Pak Petroleum Limited (PPL +1.04 per cent) accumulated 27 per cent. Improved international crude oil prices during the period are one of the reasons behind the rise.