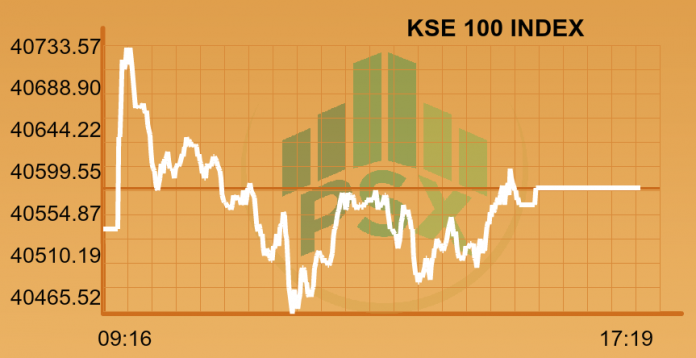 LAHORE: Pakistani equities opened on a buoyant note, swiftly surging to a high of 40,742 points (+193 points) led by E&Ps where US API’s expectation of a significant drawdown of inventory led to an overnight surge in oil (while US Keystone pipeline outage & upcoming OPEC meeting related news flows also added during the session).

However, this was short-lived as the circa 450 point rally from Tuesday’s low of 40.3 thousand triggered some profit-taking. Resultantly KSE-100 was sold down from the highs to close flat (+ 43 points/0.1 per cent). The KMI 30 index only inched 22.46 points up while the KSE All Share Index added 146.34 points since the last close. The advancers to decliners ratio stood at 165 to 152 respectively while 16 scripts remained unchanged.

The total shares exchanged in the bourse stood at 156.99 million for the day but participant interest was centered around K-Electric (KEL +10 per cent) turning over 77 million shares or 49 per cent of the days’ volume, as comments from privatisation minister regarding Shanghai Electric’s looming takeover sparked a mindboggling rally in the battered stock.

Worldcall Telecom (WTL +4.83 per cent) ranked second on the chart with a volume of 8.31 million shares, followed by TRG Pakistan Limited (TRG; +1.50 per cent) at 6.9 million shares.

Meanwhile, Honda (HCAR -4.5 per cent) took a beating as 2Q earnings missed expectations on the back of lower margins. Honda released their financials for the second quarter posting an EPS of 11.33, a decline of 28.9 per cent QoQ. The lower EPS was mainly due to increase in the cost of sales of Rs 2.1 billion for the quarter.

PSX remained in news and media as on late Tuesday evening it was reported that Securities and Exchange Commission of Pakistan (SECP) commenced an inquiry into complaints of trading data leakage from the Pakistan Stock Exchange.