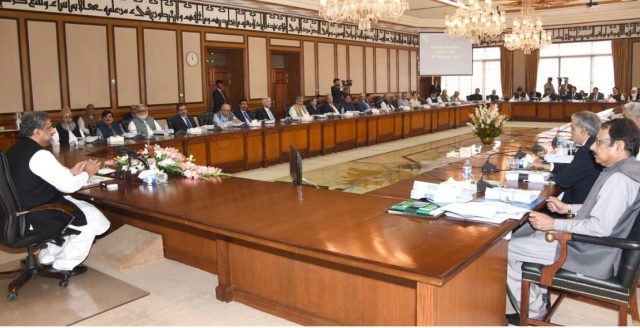 ISLAMABAD: A blue-eyed Director to Minister for Petroleum Division Asim Qadir Haye has availed medical charges amounting to above Rs 2 crore from the national exchequer for eye treatment at London’s hospital and federal cabinet has ratified it.

Documents available with Pakistan Today disclosed that Director to Minister for Petroleum Division Asim Qadir Haye has availed eye treatment from London’s hospital and obtained Rs 2 crore, 37 lakh and 95 thousand from the national exchequer. And, federal cabinet has given its ratification to this effect during November 23 meeting held under Prime Minister Shahid Khaqan Abbasi.

It is vital to note here that Asim Qadir Haye remained Director to Minister during the last four years with the incumbent PM when he was the Minister for Petroleum and Natural Resources in the cabinet of former PM Nawaz Sharif.

Though Asim Qadir Haye is a Section Officer of BS-18, however, he has been working as Director to Minister and using the powers of BS-20 (grade twenty) official from the last four years.

Federal Secretary Petroleum Sikandar Sultan Raja has raised reservations over the posting of Asim Qadeer Haye as Director to Minister after Shahid Khaqan Abbasi became PM but no action was taken. More, federal cabinet has ratified the medical charges of Asim Qadir Haye as not a single member of the cabinet raised concerns or objection to the worthy amount of above Rs 2 crore paid to Asim Qadir Haye from the national exchequer for eye treatment at London’s hospital. Even, it was kept secret from media as it was not included in the press release of PM Office issued on November 3, 2017.

The sources further said that Asim Qadir Haye is a blue-eyed official of the incumbent PM Shahid Khaqan Abbasi who appointed him as Director to Minister when he was Minister for Petroleum and assigned him the powers of grade 20 official. They said Asim Qadir Haye has informed the premier to get federal cabinet’s ratification to the heavy amount of Rs 23,795,411.44 to avoid audit objections and future problems. And, officials of petroleum ministry have forwarded a summary to the federal cabinet for ratification on the advice of PM Shahid Khaqan Abbasi.

Due to PM Abbasi’s intervention, the cabinet has granted ratification to the medical charges amounting to Rs 23,795,411.44 of Asim Qadir Haye, Section Officer (Mineral) BS-18/Director to Minister for Petroleum Division, said sources.

Efforts to get Asim Qadir Haye’s stance over eye treatment at London’s hospital with public money were made through repeated phone calls, text message and WhatsApp, however, no reply was received.