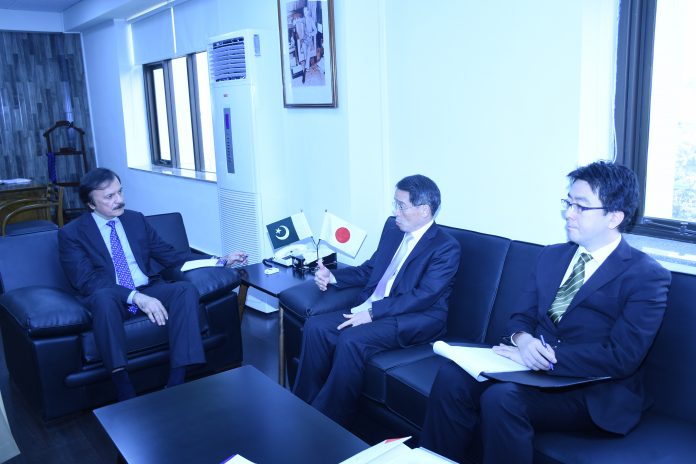 ISLAMABAD: Special Assistant to Prime Minister on Revenue and Federal Minister Haroon Akhtar Khan on Tuesday invited the Japanese businessmen and investors to visit Pakistan and explore investment opportunities in a broad range of areas, particularly infrastructure development in the country.

“We have a much-improved security situation and a stable economy with all economic indicators doing very well which should make a strong case for Japanese investors to come to Pakistan and benefit from the investment opportunities available here,” he said during a meeting with Japan’s Ambassador to Pakistan Takashi Kurai who met the minister at FBR House to discuss matters related to bilateral economic relationships in the backdrop of recent visit of Japan’s Foreign Affairs Minister Taro Kono to Pakistan.

Haroon briefed the visiting envoy on the headways made by the government in overcoming energy shortages and reducing the gap between demand and supply of natural gas in the country. “The evidence for all this is on the ground as we have moved from a routine 18-hour load-shedding in the past to a minimal power outage now, and the same can be said about the gas sector where the recent installation of two LNG terminals has considerably reduced the demand-supply gap, enabling the government to provide regular, always-on gas supply to the industry,” he said.

The minister pointed out that these initiatives and gains reaped in the energy sector had already started showing results as evidenced by a 15 per cent year on year jump in the month of December, tax-to-GDP ratio had risen from 9.5 per cent to 12.5 per cent over the last four years and an impressive 18 per cent revenue growth had been recorded since the start of the fiscal which pointed to the burgeoning of businesses and a strong health of the economy.

The Japanese ambassador lauded the government of Pakistan for its liberal, business-friendly and pro-investment policies and evinced a strong desire on behalf of the government and the people of Japan for a strong and prosperous Pakistan. He assured the Japanese investors would further bring their businesses and forge partnerships with their Pakistani counterparts in days ahead, and requested the minister for a more liberalised, favourable tax regime in this regard.

The ambassador also lauded the role being played by Pakistan in improving regional stability and fighting terrorism and reaffirmed his country’s support for the Pakistan government’s efforts for industrial development, improvement of socio-economic environment and security situation.