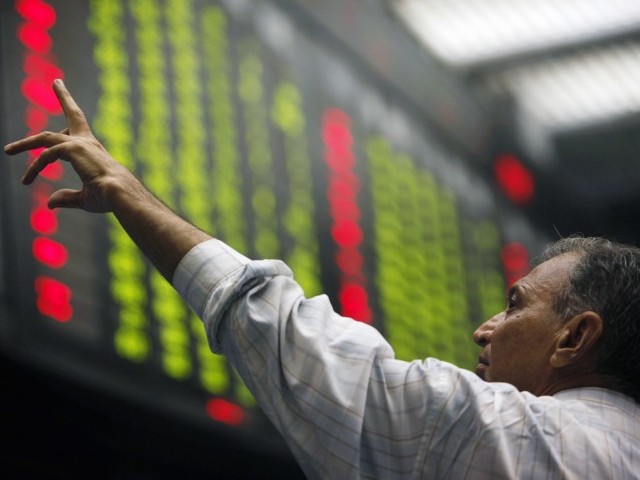 LAHORE: Pakistan Stock Exchange (PSX) started yet another week in the red as indices kept shedding points from the very beginning. With fragile global markets and noisy political scenario, the market lacked incentive for investor sentiment.

Meanwhile, WTI oil prices trended below the $60/bbl mark, which kept oil stocks under pressure. Investors also remained concerned on mounting external account pressure and depleting foreign exchange reserves. Since Jun 2017, reserves held by are down by $ 3 billion to $ 13 billion.

The first listing of the year, Matco Foods Limited, shall commence trading on Tuesday. The company has been listed under the Food and Personal Care Products sector with the symbol MFL.

Activity during the day remained lacklustre as trading volume and value were down 5 per cent and 14 per cent, respectively.

The market volumes were recorded at 215.28 million with Azgard Nine Limited (ANL -5.30 per cent)  a leader by miles. The script had 34.26 million shares traded followed by TRG Pakistan Limited (TRG +2.06 per cent) which was far behind with 12.16 million shares exchanged.

ICI Pakistan Limited (ICI -1.14 per cent) disclosed phase I of its 150,000 tons per annum (TPA) expansion project at its soda ash manufacturing facility in Khewra had successfully been commissioned and commenced operations.

Consequently, as a result of the addition of this 75,000 TPA expansion in phase 1 at its soda ash manufacturing facility, total capacity at the plant now stood at 425,000 TPA.

Board of Clover Pakistan (CLOV) gave approval for due diligence for acquisition/merger with Hascombe Business Solutions (Pvt) Ltd (HBSL), which is the distributor of Ricoh International B.V., the supplier of Ricoh branded photocopier, printers, projectors, interactive boards, and other petroleum-related equipment. HSBL is also engaged in marketing and distribution of office automation products, fuel dispensers, vending machines and servicing of cleaning and up keeping of fuel station canopies and boards. CLOV is also exploring the possibility of entering into marketing and distribution of car care and related products.

Technically speaking, the KSE 100 index failed to build upon the late session recovery witnessed on Friday and closed below 20EMA (43,695) on thin participation. For now, immediate resistance is 43,900 (intraday high) while it is expected that 43,025 (200EMA) would be the next possible support.