PM invites investors from UAE to invest in Pakistan 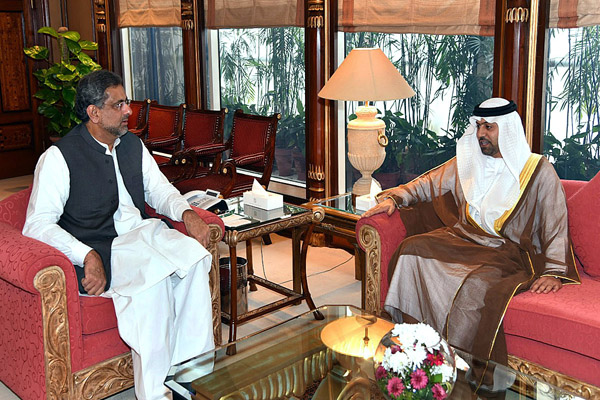 Talking to United Arab Emirates’ (UAE) Ambassador to Pakistan Hamad Obaid Ibrahim Salem Al-Zaabi, who called on the Prime Minister here at the PM Office, PM Abbasi expressed satisfaction over the increasing volume of trade between Pakistan and the UAE.

The prime minister underscored the importance Pakistan accords to the UAE and said a significant number of expatriate Pakistanis were playing a vital role in the development of UAE and serving as a bridge between the brotherly countries.

The prime minister appreciated UAE’s development and humanitarian assistance to Pakistan, particularly in the far-flung areas.

He said this cooperation was a manifestation of strong bonds between the two countries.

Prime Minister Abbasi conveyed good wishes on behalf of the government and people of Pakistan to Sheikh Khalifa bin Zayed Al Nahyan, the president and the people of UAE.

The ambassador thanked the prime minister and expressed his country’s interest in investment in the oil and gas sector of Pakistan.