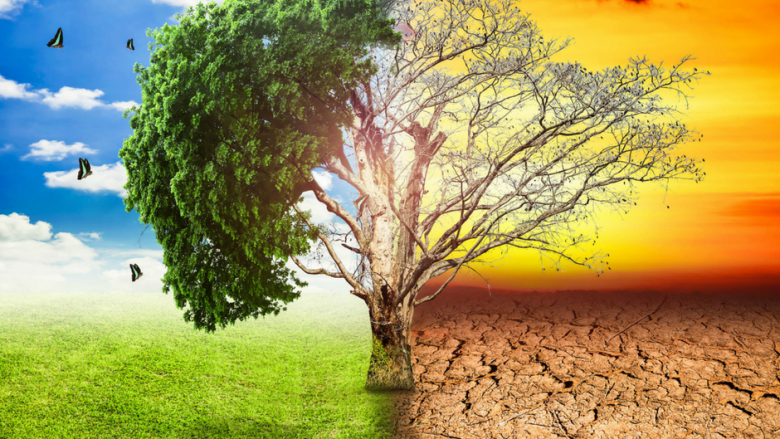 Here is the bad news when it comes to climate change: if the government of Pakistan consisted of 100% extremely competent and completely uncorrupt officials, if they devoted all of their resources and energy towards solving Pakistan’s problems with climate change, it would quite simply not even be close to being enough.

Are you sufficiently depressed yet?

That, of course, does not mean that Pakistan necessarily has to become an unlivable hellhole, but it does mean that we need to understand that we will be one of the worst affected by a problem not entirely, or even mostly, of our own making and that we need to set reasonable expectations of what we can achieve on our own. It also means that, given the fact that some of the worst effects of climate change are already happening and will hit us worse than most of the world, Pakistan also needs to take the challenge much more seriously than most other countries.

Before we get into what needs to be done, though, we need to understand what is most likely to happen, given the changes that have already begun to take place in the climate.

Firstly, temperatures are going to start to become warmer. Winters in Karachi and Hyderabad are already effectively the equivalent of what a slightly chilly spring used to be a generation ago. And the summers throughout the country are already starting to get hot, and will get hotter. 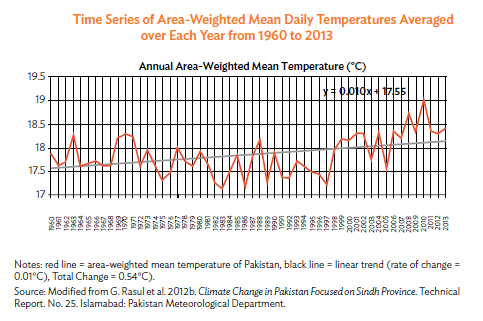 According to a study by the Asian Development Bank, the average heatwave length is getting longer by about 11 days per decade in Pakistan. If that trend persists (or worse, accelerates), that means the heatwave gets longer by a little over one day every year.

What does that mean on a day-to-day basis? The heat waves that currently occur for a few days in some parts of the country every couple of years or so will occur every year, almost all over the country, and for weeks at a stretch.

Secondly, the precipitation pattern is going to shift. It is not as though Pakistan is going to suddenly have less rain and less water, as most people appear to be fearing this year. In fact, the opposite is true: on average, for instance, most parts of Pakistan will actually get more rain over the coming decades. 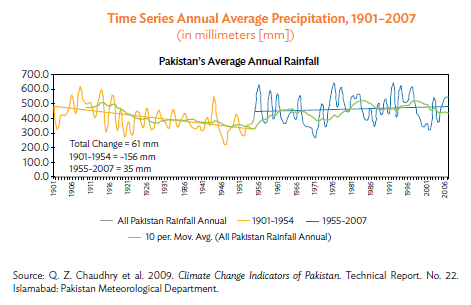 The problem will be one of sharper divergences from the mean. In other words, rather than having mostly normal rain every year with droughts and floods every decade or so, Pakistan will move towards having much more frequent droughts and floods, with fewer years of what used to be considered ‘normal’ rain.

For Pakistanis, this has meant asking the question about whether we need to build more dams, and the answer, as with most things in life, is much more complicated than that.

Dams can have massive water storage capacity. When it is at full capacity, Tarbela dam, for instance, contains enough water to supply the entire city of Karachi for about eight years.  However, getting the water from where it is to where it needs to be is not simply a matter of building a dam at where the rain falls, and then having it flow through rivers to where the people live.

For one, water evaporates from rivers faster than one might think, and seeps into the ground from the river bed, so one loses a lot of water along the way. 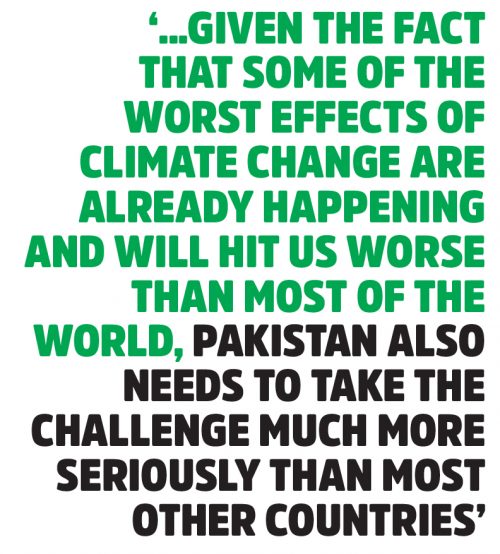 And for another, the dam needs to be built at a point in the river that will actually see the higher flows. Sorry, fans of Kalabagh dam, but its completed feasibility study, which was the biggest reason President Musharraf gave for why it could be built faster than any other dam site, is based on old data. As rain patterns shift, Kalabagh may not be the best site for a dam. Indeed, more recent climate models project that the upper portions of Khyber-Pakhtunkhwa, where Diamer-Bhasha dam is being built, is probably a better site.

So, what can be done to help mitigate and adapt to the effects of climate change in Pakistan?

For one, the country most likely needs to speed up the building of infrastructure to provide electricity – and thus cooling – to as many people as possible, particularly in parts of Sindh and Balochistan  that regularly see temperatures above 50º Celsius.

And secondly, and perhaps much more crucially, we need to build an infrastructure that allows for the most efficient possible utilization of water.

Insafian: So our billion-tree tsunami is looking like a pretty good idea right about now, isn’t it?

Nooni: It’s certainly a good idea, but if you think it will help mitigate climate change in any meaningful way, I think you will probably be disappointed.

Insafian: Look, we’re not naïve. We know Pakistan alone cannot stop or reverse climate change. But the point is that governments need to be good shepherds of the environment, and this is a step in that direction.

Nooni: Sure, I’ll grant you that. But let’s be honest: it’s also the non-controversial, and thus easier, thing to do. Where do you stand on building more dams, for instance? Specifically, what about Kalabagh dam?

Insafian: We’re not opposed to building it if we can get consensus from all four provinces.

Nooni: That’s a cop out of an answer and you know it. Throw your cards down. Where do you stand?

Insafian: It’s not a cop out. We know where we stand. We believe building dams is important, but these things need consensus because water use is a highly emotive and sensitive issue. Why does the dam need to be built at Kalabagh? Why not many more smaller dams elsewhere? 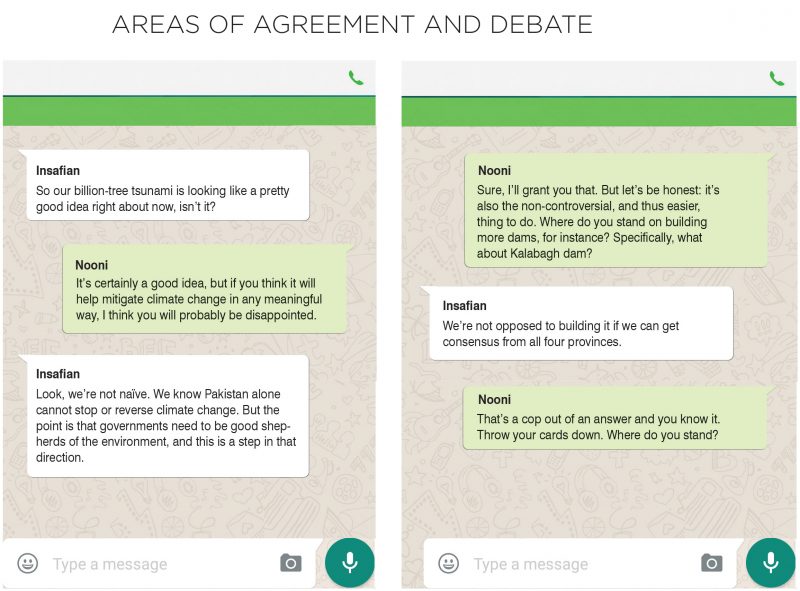 Nooni: Kalabagh is a perfectly logical site to build a dam. The only reason people are afraid of having the dam be built there is because it is in Punjab, and some activists in Khyber-Pakhtunkhwa and Sindh are afraid of losing control of their water to Punjab.

Insafian: It’s not an unreasonable fear. Punjab has historically been much more… shall we say… ‘assertive’ in its desires with the Indus River system.

Nooni: Let’s not get into unproven conspiracy theories. Okay, so let’s move off Kalabagh dam: where else are you in favour of building dams?

Insafian: Khyber-Pakhtunkhwa has many more suitable sites than Kalabagh and far less controversial. Why not focus on building dams there?

Nooni: We seem to be going in circles. Let’s move on.

Insafian: Okay, why are you investing so much in coal-fired power plants when you know it only makes climate change worse?

Nooni: Because it is an interim measure. It is a means to an end. It is the fastest way to add electricity generation capacity to the grid, which by the way, we need to do since so many more people will be using air conditioners over the summer. And the summer is longer than ever before.

Insafian: Why not use solar power? It’s just as cheap as coal to install and much more environment-friendly.

Nooni: Because it cannot handle the baseload since it is so intermittent. And it’s not as though we aren’t installing solar power plants. In case you haven’t noticed , there is a 100-megawatt solar power plant in Bahawalpur right now.

Insafian: That’s not nearly enough. And solar may be intermittent, but it also happens to be most abundant on the hottest days, which means it would be ramping up right alongside demand.

Nooni: That’s only partially accurate. Yes, it would be ramping up on hot, long summer days, but actually, the highest use of electricity is during summer nights, not during the daytime. And energy storage technology is not nearly good enough for us to be able to store that electricity in any meaningful quantities, which leaves us stuck with a lot of wasted energy. 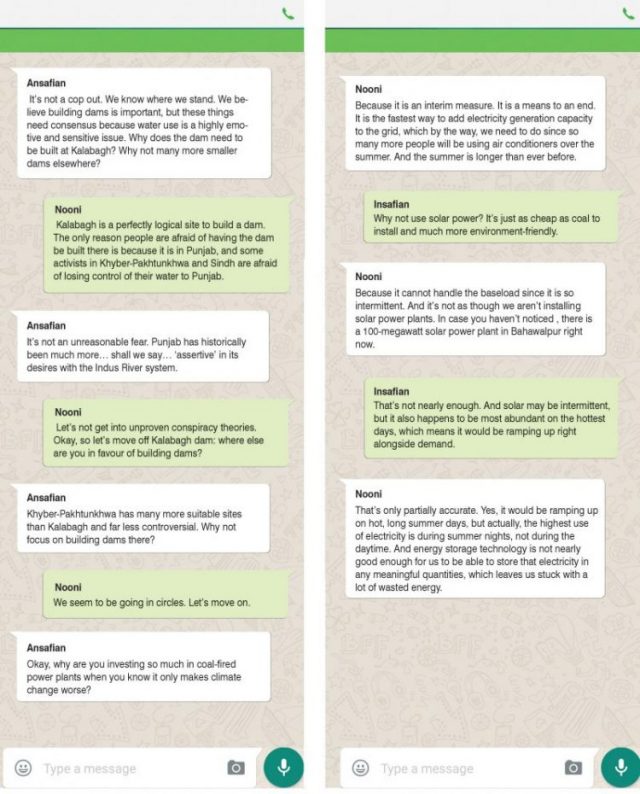