Finance and interiors divisions to get Rs123bn and 210bn, respectively 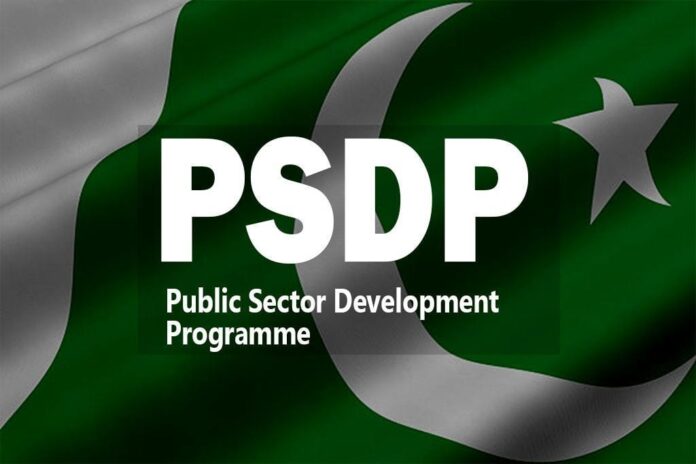 ISLAMABAD: The government on Friday unveiled the budget for fiscal year 2020-2021 and has allocated Rs900 billion for federal Public Sector Development Programme (PSDP 2021-22), 38 per cent higher than the Rs650 billion allocated in the outgoing fiscal year.

The total outlay of the PSDP for the next fiscal year is Rs2.1 trillion out of which Rs1.235 trillion has been earmarked for provincial PSDP, whereas the remaining Rs900 billion has been reserved for the federal PSDP.

According to the budget documents, the Rs900 billion includes Rs100 billion of foreign aid.

According to the annual plan, an amount of Rs469 billion rupees, which is 52 per cent of total PSDP, has been allocated for projects aiming at modernising infrastructure for accelerating growth. An amount of Rs228.7 billion has been earmarked for energy sector projects for the next fiscal year.

“An amount of Rs90.313 billion rupees has been allocated for water sector projects, excluding hydel projects during the next fiscal year,” it adds.

In order to attain one per cent additional afforestation during the next fiscal year, the government has allocated Rs14 billion funds to ensure efficient implementation of Ten Billion Tree Tsunami Program-Phase 1.

An amount of Rs302 billion, which is seventy four percent higher than the PSDP 2020-21, has been earmarked for the development programme of transport and logistics. The concessional financing agreement for landmark ML-1 project of Pakistan Railways is expected to be finalised in the first quarter of next financial year and subsequently, arrangements will be made for its groundbreaking.

The Ministry of National Health Services has proposed 42 new schemes for financing out of the next year’s PSDP. Some important initiatives include improving emergency and response services for COVID-19 and other transmittable diseases.

For Physical Planning and Housing Sector programmes, Rs49 billion have been allocated.

In order to promote balanced regional development, an amount of Rs160 billion, which is 18 per cent of the PSDP, has been kept aside for projects aiming at fostering harmony in the federation.

Out of the Rs900 billion, Rs3.55 billion have been allocated for the Aviation Division while the Board of Investment (BoI) will get Rs80 million in the next fiscal year. Another Rs46 billion has been earmarked for Cabinet Division, whereas the Climate Change Division will get Rs14.32 billion.

The budget documents state that Rs1.61 billion had been set aside for the Commerce Division while Rs451.32 million were allocated for the Communication Division, other than the National Highway Authority (NHA).

The Higher Education Commission (HEC) has been allocated Rs42.4 billion, while Rs24.21 billion has been earmarked for the Housing and Works Division. At least Rs279 million will be provided to the Human Rights Division and Rs2.91 billion has been set aside for the Industries and Production Division.

In the federal PSDP, Rs1.89 billion have been allocated for the Information and Broadcasting Division and Rs9.361 billion will be provided to the Information Technology and Telecom Division.

For the Inter-Provincial Coordination Division, Rs3.73 billion have been set aside whereas the Interior Division would get the allocation of Rs210.48 billion. Meanwhile, Rs69.9 billion have been earmarked for Kashmir Affairs and Gilgit Baltistan Division.

The National Health Services, Regulation and Coordination Division has received Rs21.72 billion whereas Rs27 billion has been earmarked for the Pakistan Atomic Energy Commission.