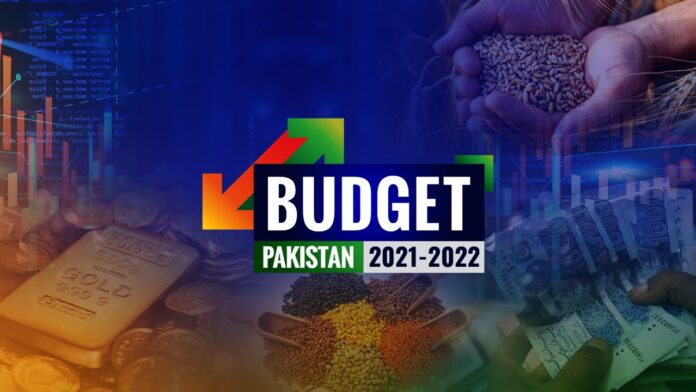 Amid a ruckus and uproar from the opposition benches, Federal Finance Minister Shaukat Tarin unveiled the Rs8.478 trillion budget for the next fiscal year.

Tarin, the third finance minister in as many years to present the budget for the Pakistan Tehreek-e-Insaf-led government, took the floor of the National Assembly while opposition members staged a protest. Many of them chanted slogans against the government, while many held placards criticising the budget.

The budget reflected the transition of the country’s economy from austerity to growth as the federal government eyes growth and development in its third year.

The total outlay of the budget was Rs8.47 trillion whereas the tax collection target was set at Rs5,829 billion.

Speaking about the various allocations made by the government, Tarin said Rs480 billion had been allotted for pensions payments of both civilians and retired military officers. The minister stated that the defence budget of the country had been allocated Rs1,370 billion while the government had earmarked Rs1,168 billion for development and non-development grants for provinces.

Tarin said that the government had allocated Rs682 billion for subsidies to various sectors of the economy, adding that Rs479 billion had been allocated to run the civil government.

Tarin said the government was serious in stemming the spread of the coronavirus and keeping its adverse effects at bay, adding that the government had set aside Rs100 billion for it, whereas, for the procurement of Covid vaccines, another $1.1 billion has been allocated.

Likewise, the federal PSDP had been allocated Rs964 billion. In a big relief for daily wagers, the government has increased the minimum wage to 20,000, an increase of more than 20%.

Tarin lashed out at the previous governments, saying that a mountain of circular debt amounting to Rs1 trillion was inherited by the incumbent government due to the botched policies of its predecessor.

“We made the [capacity] payments otherwise the country would have defaulted,” he said. “I am presenting you the real picture of the nation and to highlight our performance,” added the minister.

In interest payments, Tarin said that the government had allocated a mammoth Rs3.06 trillion.

Tarin said PM Imran Khan’s government does not hesitate from taking difficult decisions. He said the incumbent government had, through its sound economic policies, turned around the current account deficit into a surplus in 2021.

The minister paid tribute to the PTI government for stemming the spread of the coronavirus pandemic and taking steps to ensure businesses did not suffer massive losses in the country due to the lockdowns.

“The government, through the Ehsaas Emergency Cash Programme, provided cash to 12 million people across the country,” he said.

The finance minister announced that the government had set aside Rs260 billion for the Ehsaas programme in the budget. Tarin said remittances had increased in Pakistan to record levels, adding that these are expected to rise to $29 billion by the end of this month.

“This is proof of the love that overseas Pakistanis harbour for Prime Minister Imran Khan,” he said.

Tarin said the economy had grown and as a result, more people had secured jobs over the years. The finance minister said that despite the coronavirus pandemic, the per capita income of the common man had increased by 15%.

Speaking about tax collection, he said it had grown by 18% and had crossed Rs4,000bn, adding that critics had no response to the government’s impressive performance in this regard.

The finance minister announced that the country’s economy was now entering the growth period, adding that almost every sector is growing. He said Pakistan was seeing a “historic growth” in agriculture, stating that apart from cotton, all other crops saw extraordinary increases.

He said that growth in the services sector helped improve numbers pertaining to poverty and had also played a major part in the generation of wealth in Pakistan.

“We will need to bring back administrative controls which were removed during the Musharraf era,” he added.

Tarin said the government had kept the growth target at 4.8% for the fiscal year, adding that the government will not leave the poor and the destitute at the mercy of inflation. “Never in our economic history, were poor people able to realise their dreams,” he said, adding that PM Imran Khan wanted to uplift the poor.

He said the government had decided to provide interest-free loans of up to Rs500,000 to the poor.

Speaking about the importance of boosting exports so Pakistan can earn foreign exchange, the finance minister said the government was focused on the creation of economic zones to facilitate industries, create jobs and boost exports.

The minister announced that Pakistan has introduced mortgage financing for the first time ever, adding that the passing of the foreclosure law had enabled banks to start lending to people.

He announced that the Public Sector Development Programme will be increased from Rs630 billion to Rs900 billion to counter the adverse impact of the coronavirus pandemic. The finance minister is interrupted by Speaker Asad Qaiser as he urges Opposition lawmakers to observe silence and the women MNAs in the Parliament to sit down.

Tarin announced a development package for 14 districts in Sindh, adding that these will focus on improving education, solving the province’s water issues and carrying out development in these districts.

The minister announced that the government has slashed sales tax on locally manufactured cars from 17% to 12.5%. The government has also abolished Federal Excise Duty (FED) on 850cc cars, he said.

He announced the government’s initiative to earmark $1.1bn to procure coronavirus vaccines, adding that the government aimed to vaccinate 100mn people by July 2022.

Tarin said the government was introducing third-party audits which would thwart the FBR harassing any individual or business entity. He said those who are found guilty of evading taxes or deliberately hiding their income will be fined severely.

“The rich will be asked to pay taxes in accordance with their wealth,” he said, adding that the salaries class will not be burdened with additional taxes. The finance minister said the track-and-trace systems will be strengthened so that undocumented trade does not flourish in the country.

Tarin said the government was slashing withholding taxes on mobile phones, adding that it will be reduced to 10% at first and then 8% later. The minister stated that that the government was reducing customs duties on electric vehicles for a year to promote the industry.

The tourism industry was also the focus of the budget, he added.