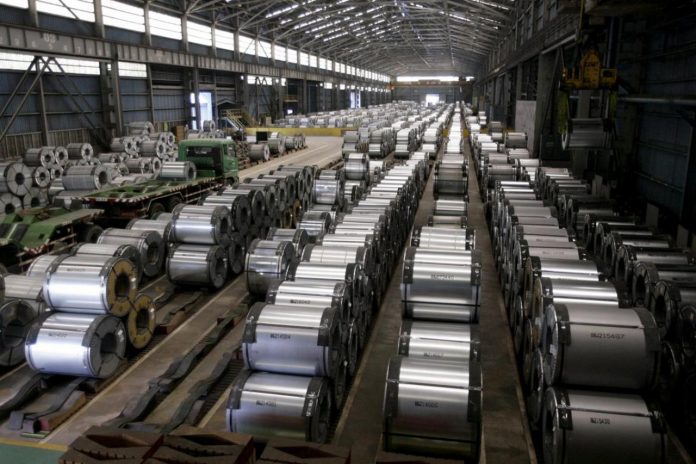 LAHORE: The steel sector once again has raised prices by 8 per cent, which is the fourth of its kind since February 2018, industry sources confirmed.
Speaking to Pakistan Today, sources confirmed that the latest price increase was a step to cushion the blow from the recent cost increase through the Rupee devaluation. Sources did not rule out a further price increase in the coming months for all steel products to sustain margins post-drawdown of older inventory.
Highlighting the Rupee that has lost 21 per cent against the US Dollar since December 2017, sources informed that Reinforced Bar (rebar) prices have been raised up to Rs4,000 per ton. The new price is set to Rs107,000 per ton. This is the fourth straight increase in prices since February 2018, resultantly taking increasing price swelled up to 26 per cent. Cold Rolled Coil (CRC) and Galvanized Coils (GC) by Rs2,000 per ton and Rs3,000 per ton, effective from Wednesday.
The new price for 1mm CRC and GC comes to Rs99,500/ton and Rs104,850/ton, respectively. International CRC-HRC margins continue to trade in a range of $65-67/ton amid turbulent international dynamics against the assumption of $70/ton. The discount of import against locally produced rebar has narrowed to 20 per cent following the price increase, which is in line with the trend seen in recent months.
The price increase will likely allow manufacturers to ward off pressure on margins stemming from a weaker Rupee. The movement in international scrap price that got nominal since the last price increase in June this year, suggest primary margins have remained largely stable.
A prominent name in the steel sector and LCCI former senior president, Kashif Younis Meher said that the steel sector needed a long-term strategy that provides a basic ingredient for the overall economic development of the country. A developed steel industry is very crucial. Kashif said that in the early stages of economic development, steel consumption is expected to increase at a faster rate because huge quantities of steel are required to build basic infrastructure, including bridges, dams, railways, and power generation, distribution and transmission projects, etc. Steel is also a principal raw material in the production of all kinds of machinery, equipment and vehicles.
Kashif Younis said Pakistan is a developing economy with an abundant potential to attain faster industrial growth. However, sustainable industrial and economic growth depends on an assured supply of steel. Inadequate availability of steel acts as a natural drag on development efforts in almost all sectors of the economy. Therefore, planning for steel production should be a critical part of overall development planning in the country.
Pakistan’s steel industry, Kashif said, is characterised by small plants, most of which are utilising obsolete technology and these products cannot compete with cheaper imports, particularly from India and China – where manufacturers enjoy benefits from economies of scale and more efficient production processes. The domestic industry, therefore, operates at only 60 per cent of its installed capacity, despite strong local demand for steel products. The healthy growth of 24.8 per cent in steel production during FY15 was associated with a 34 per cent increase in quantum imports of iron and steel scrap.
Kashif pointed out that downstream industry had been suffering a lot as the governments stayed unfocused on developing and supporting sector, especially mini steel mills which require less capital investment throughout the country.
- Advertisement -
Facebook
Twitter
Linkedin
WhatsApp
Email
Previous articleSECP employees donate one day’s salary for dams
Next articlePTCL group’s revenue grows 4pc to Rs60.7bn