China’s willingness to extend credit has transformed it into the best friend of emerging markets. But there are reasons to believe the flow of easy money may suddenly dry up — just as distressed economies from Argentina and Venezuela to Turkey and Pakistan look to Beijing for a lifeline that would be less onerous than an International Monetary Fund bailout.

In the last decade, China made more than $62 billion of loans to Venezuela, where hyperinflation prompted the government to devalue the bolivar by 95 percent at the weekend. In July, another $5 billion advance was approved to increase petroleum output there, even though a previous oil-for-loan program backfired.

China has also signed currency swaps with 32 counterparties since 2009. While mainly aimed at facilitating trade in the yuan, these arrangements also served to boost foreign-exchange reserves at troubled partners. Argentina’s central bank is reportedly negotiating to expand its swaps from $11 billion to $15 billion, while trying to stem the peso’s slide by pushing up banks’ reserve ratios.

Hosts of President Xi Jinping’s Belt and Road Initiative are also recipients of China’s largess. As its relationship with the U.S. and NATO sours, Turkey is turning to the country for financing. China Development Bank, the nation’s most prominent policy lender, extended more than $2 billion of loans to Turkey last year, a jump of more than 40 percent from 2016, data compiled by Bloomberg show. Pakistan, poised to seek an IMF package for the 13th time, is another candidate for a Chinese bailout.

But China’s shaky domestic economy may mean that it’s no longer politically viable for Beijing to keep being so generous.

China Development Bank makes a good example. Known for funding overseas projects, the bank’s main mandate is actually domestic. In its 2017 annual report, supporting belt and road got a lower billing than fighting poverty at home and financing Chinese infrastructure projects and strategic industries such as semiconductors and electric vehicles.

Last year, CDB advanced 880 billion yuan ($128 billion) for shanty-town redevelopments, and only $17.6 billion in loans to belt-and-road projects. Outstanding loans to destinations outside mainland China account for only 2.4 percent of the bank’s loan book.

China Development Bank’s main mandate is domestic, with loans to regions outside the mainland accounting for only 2.4 percent of its total 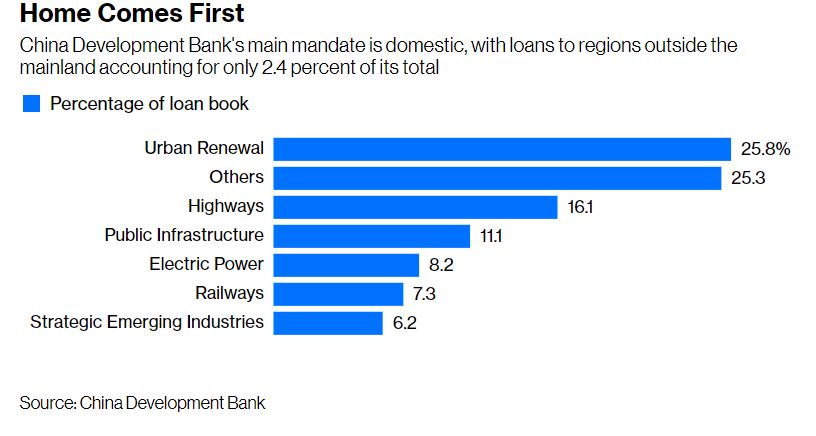 In late June, China’s property and stock markets were jolted after reports that policy banks have tightened approvals for shanty-town project loans, as part of government efforts to rein in the red-hot property market.

If China Development Bank can’t fulfill its primary goal of lifting millions of Chinese from poverty, it becomes harder to justify extending a helping hand to other nations.

The trade war and tighter liquidity are starting to bite. China’s consumer confidence dipped in recent months, while the second-quarter earnings report card for technology companies, barometers of consumer power, is looking ugly.

Private enterprises are bearing the brunt as Beijing restricts shadow banking. The Caixin purchasing managers’ index, which is weighted toward manufacturing activity by smaller companies, has fallen behind the official PMI number for five straight months. Meanwhile, the mainland stock market is in solid bear territory, in part because corporate defaults may pop up in the most unexpected places.

What will China’s citizens say if Beijing is splashing out billions to foster friendships with (perceived) basket cases, when at the same time people at home are stuck in ghettos, small businesses are going bankrupt and no one is feeling rich because of the stock market and peaking home prices?

You can expect a revolt.

Back in February, President Xi Jinping looked invincible as China abolished presidential term limits after a year during which the economy and markets proved resilient. Now, with signs the economy is faltering amid the trade war, many are starting to question whether his strongman approach has backfired.

Xi is running out of political capital to pursue grand geopolitical ambitions. Expect him to scale back. And if you’re a struggling emerging market looking for a loan — maybe the IMF isn’t such a bad option after all.

This article first appeared in Bloomberg.com, and is published by special arrangement