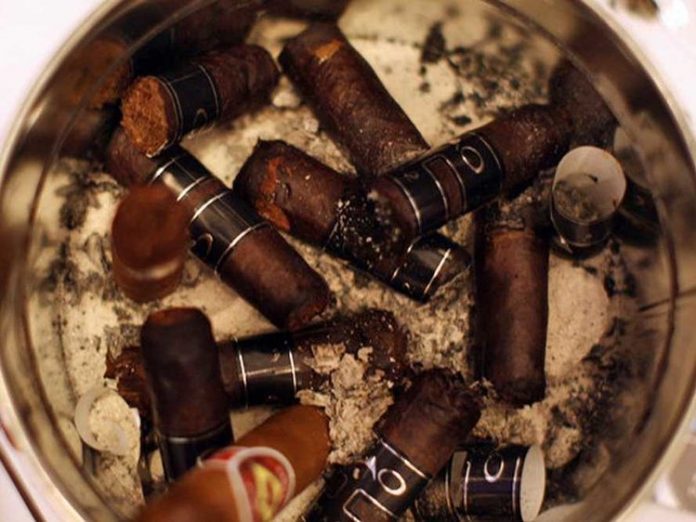 Last week must have shaken the faint-hearted. KSE-100 Index declined by 4.4%, the Pakistan rupee depreciated to a record low of Rs131 (-5%) and most of the macro numbers are being downgraded. The Finance Minister reminded over the weekend that the path of IMF would be painful, but the government is prepared to make the adjustments which are required.

However, he also stated that they will not compromise if the Fund’s demand’s conflict with national security issues. If this happens, the government would try to approach “friendly” countries again. According to the government, they need $12bn for next year and the ask from IMF is for $8bn. In my view, the discussions with IMF will not be easy. The Prime Minister is visiting China on the 4th of November.

Last week was tough, not only for Pakistan. MSCI EM was down -2.2%, the Nasdaq Composite Index was down -4.3%, Eurostoxx 50 was down -4.4% and the Chinese CSI was down close to -8%. President Trump blamed the Fed, which he thinks has gone “out of control” with its “crazy” interest rates increase. The President is correct. The US economic policy has a lot to do with the emerging market turmoil, especially in the currencies. The interesting thing is that while the Fund typically demands exchange rate adjustment for global macro adjustments, its new Chief Economist, Gita Gopinath is not a follower of this.

Her work on “dominant currency paradigm” shows that a floating exchange rate provides less of a cushion against the dollar rate adjustments. While the Fed could be blamed for EM currencies woes, its foreign policy against Iran is driving global oil prices and its trade war against China is causing further economic jitters. The global economy seems to have evolved from an economic paradigm of “Washington consensus” to “Washington controlled”.

The market is likely to remain sentiment driven over the next few weeks. Many people have drawn comparisons with the bear market of 2008.

I also found it interesting that the only positive comment I could find was from the former CEO of KASB Funds. After a 40% decline in 2008, the market went up by 630% from January 2009 to its current level – a 60%+ CAGR return.

So perhaps one lesson from 2008 is to not forget the perspective. Our GDP growth forecast for 2019 is 3.5%, far below the government’s target of 5.8%. The sell-side consensus is around 5%. Yet even our conservative estimate implies nominal GDP pf growth of 12% assuming inflation of 7.5%. Theoretically, corporate earnings should follow nominal GDP growth. A 10-12% earnings growth is quite attractive given where the market valuations are.

It’s not surprising that the school of value investing was born during the 1920’s. Its founder, Benjamin Graham believed in finding “cigar butts”; companies trading below the value of its assets. After last week’s decline, almost 30% of KSE-100 companies are trading at or below book value. See the list below taken from Zakheera.com: 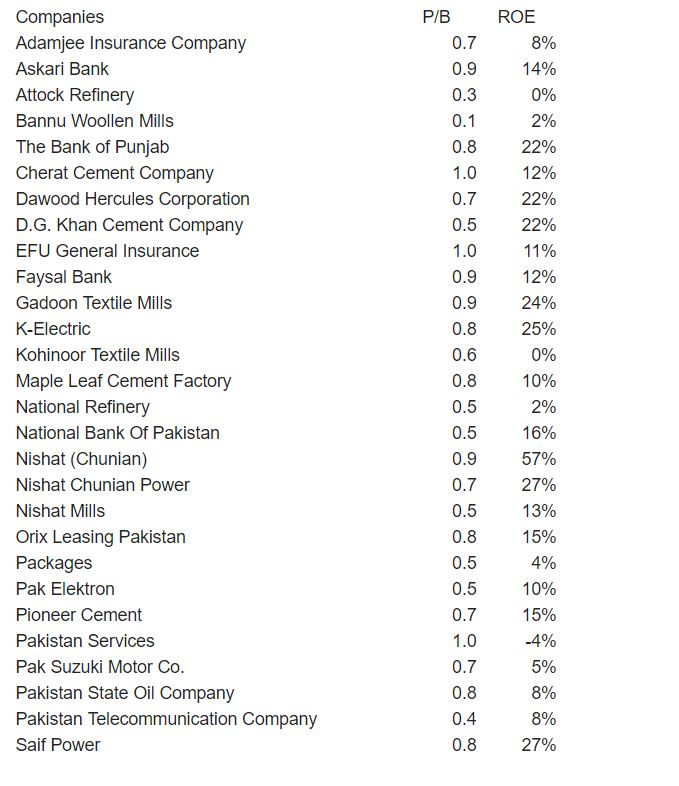 As expected, the list includes many stocks from cyclical sectors such as cement and autos. However, it also includes some stocks from sectors such as insurance which should benefit from structural growth, and textiles which should benefit from government’s push on exports and exchange rate depreciation. Some textile companies could also have booked gains on their cotton inventories. Power sector stocks could also rally if the government makes payments for the receivables stuck in the circular debt.

Warren Buffet was the famous student of Ben Graham and made value investment popular. However, such cigar butts are tough to find, especially in growth markets. This is why over time Buffet migrated away from it and adopted the investment philosophy of Charles Munger – who preferred high-quality growth stocks with a distinct competitive advantage.

The sample above has many high-quality companies with exceptional management, which can be seen from their 20%+ ROE. These are not cigar butts but rather high-quality Cubans!