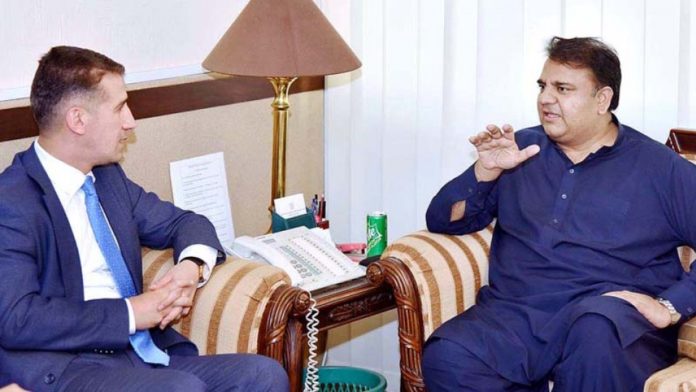 ISLAMABAD: Ambassador of Azerbaijan Ali Alizada called on Information Minister Chaudhry Fawad Hussain on Friday and said his country was ready to offer $100 million credit to Pakistan to address its energy issues besides supplying oil and oil products.

The ambassador also showed his keen interest in strengthening cooperation in the fields of media and information with particular emphasis on formal collaboration between state-run televisions of the two countries.

The information minister, while welcoming the ambassador’s offer and interest to resolve Pakistan’s energy issues, said that Pakistan would also like to enhance cooperation with Azerbaijan in the realm of tourism as well as in the fields of media and information. “Pakistan had unique tourist destinations especially in Northern areas and we would also want the Azeri tourists to come and enjoy the scenic beauty of these high-altitude areas,” he added.

The minister said Pakistan attached great importance to its relations with Azerbaijan and Pakistan was one of the first three countries that recognized the independence of Azerbaijan. He said that Baku was highly popular with Pakistan and it was a matter of satisfaction that there existed tremendous goodwill between the two countries. He emphasised the need to start direct flights between Pakistan and Azerbaijan.

Fawad Chaudhry said, “We will welcome the exchange of media delegations of the two countries as it will provide an opportunity to know more about each other’s land, people and countries and learn by sharing experiences.”

The ambassador invited the minister to attend the Baku International Humanitarian Forum to be held in last week of October, and said Azerbaijan considered Pakistan an important country. He added Azerbaijan President Ilham Aliyev greatly valued his country’s ties with Pakistan.