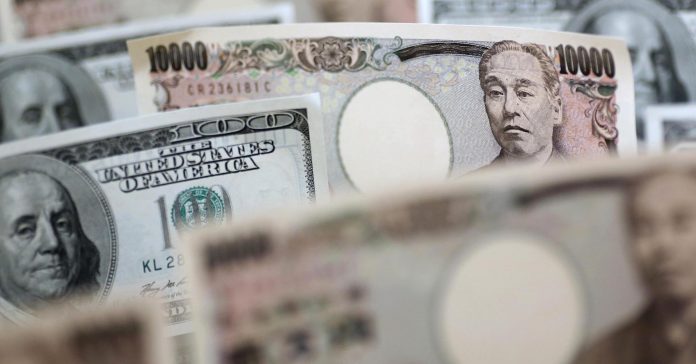 TOKYO: The safe-haven yen slipped and the Australian dollar extended its rally on Friday as an apparent de-escalation in the U.S.-China trade war gave market confidence a significant boost in Asian trade.

Investor sentiment was given a further shot in the arm on Friday after Bloomberg reported that Trump had asked U.S. officials to begin drafting a possible trade deal with China.

Against the safe-haven yen, the dollar was up 0.3 per cent at 113.03 yen, paring the previous day’s losses.

The greenback was still short of a three-week high of 113.385 yen reached mid-week ahead of the closely-watched U.S. jobs report due later in the day.

The Australian dollar climbed 0.5 per cent to $0.7242, stretching its rally from the previous day.

The Aussie, which is sensitive to Chinese economic developments, had jumped 1.8 per cent on Thursday on increasing confidence U.S.-China ties were improving.

Against a basket of six major currencies, the dollar steadied ahead of U.S. jobs data, after pulling back from 16-month highs in the previous session as investors cautiously moved back into riskier assets.

The dollar index was little changed at 96.321 after dropping nearly 0.9 per cent overnight, weighed by a rallying sterling.

Market participants were awaiting the U.S. jobs report due at 1230 GMT for clues on the pace of further interest rate rises in the United States.

“Long-term U.S. yields have established a firm foothold above 3 per cent, providing a strong backdrop for the dollar,” said Junichi Ishikawa, senior FX strategist at IG Securities in Tokyo. “And if the jobs report proves to be robust, we could see the dollar bounce back from recent losses and resume its rise.”

The dollar index had risen to 97.00 on Wednesday, its highest since February 2017, lifted by upbeat U.S. data and a corresponding rise in Treasury yields.

The dollar has enjoyed an edge over its peers through much of the week, with the euro dogged by a lacklustre European economic outlook and a cautious-sounding Bank of Japan lending little support to the yen.

Sterling was steady at $1.2998 and retained the bulk of its gains after surging 1.8 per cent on Thursday, its biggest one-day gain since April 2017.

“While a strong U.S. jobs report could push up Treasury yields and lift the dollar, an excessive climb in yields could depress equities and end up supporting the yen,” said Masafumi Yamamoto, chief forex strategist at Mizuho Securities.

China’s yuan rose about 0.2 per cent to a three-week high of 6.8970 in offshore trade after gaining 0.8 per cent on Thursday.

Worries about Chinese economic growth and the trade row had pushed the offshore yuan to a 22-month trough of 6.9800 midweek.