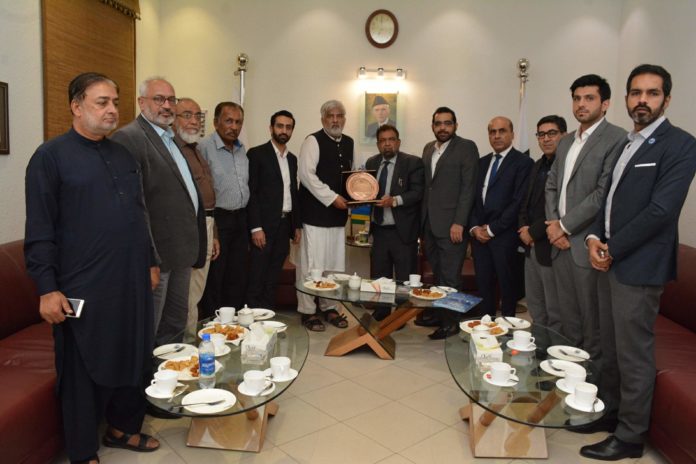 KARACHI: Consul General of Rwanda Farooque Azam Khawaja has urged the Pakistani business community to enhance trade ties with Rwanda as it was an ideal place to establish businesses besides being one of the safest and cleanest countries in the entire African region.

In a meeting with the Karachi Chamber of Commerce and Industry office-bearers, Khawaja encouraged the traders of the provincial capital to come forward and explore trade and investment opportunities in the African region, which has a population of 1,25 billion people.

“Textiles, clothing, readymade garments, pharmaceuticals, agricultural products, cement, surgical goods etc. could be exported not only to Rwanda but also to other African countries. Whatever is being produced in Pakistan could be easily sent to Africa as there existed a huge demand owing to the dire shortage of quality products in the region.”

The consul general said that the Pakistani pharmaceutical companies could help address the shortage of pharmaceutical products in the African region, whereas the cement manufacturers could take advantage of the recent boom in the construction sector of the region.

Identifying some of the obstacles hindering trade and investment, he said that the African region comprised of 54 countries but unfortunately, only 14 Pakistani embassies were operational in the region, whereas India had a total of 48 embassies.

“The overall trade volume of the African region stood at $1 trillion, of which Pakistan’s share was only $3 billion mainly due to lack of connectivity. India and China, on the other hand, have taken advantage of the situation by effectively penetrating into the African region,” he noted. “No airspace agreement existed and there was no Pakistani embassy in Rwanda. It means that a Rwandan businessman would have to go to another African country first to get a visa for Pakistan. These complexities were creating hurdles in smooth trade between the two countries.”

He mentioned that during the last 15 years, not a single high-level official, including the president, prime minister, or any other parliamentarian, from Pakistan had visited Rwanda. Therefore, he added, there was a dire need to improve government-to-government and business-to-business contacts.

“Pakistan remains focused on enhancing its exports to European Union, United States, United Kingdom, Middle East and China while one of the most promising markets (Africa) is being overlooked. Lack of proactive measures have been the main reasons why Pakistan’s exports continued to hover between $18 to $24 billion,” he added.

KCCI President Junaid Esmail Makda, in his remarks, said that it was a matter of concern that not a single agreement has ever been signed either at the government or private level with Rwanda despite huge potential.

He assured that the Karachi chamber would take up the embassy issue with the Ministry of Foreign Affairs and would strive hard to convince the decisionmakers to look into the possibility of opening up a Pakistani embassy in Rwanda which would certainly help improve connectivity and bring business communities of the two countries close to each other.

Expressing concerns over limited trade volume between the two countries, the KCCI president noted that during 2017, Pakistan’s export to Rwanda stood at $0.205 million while imports from Rwanda stood at $34.485 million. He stressed that the trade relations between Pakistan and Rwanda require special attention of the policymakers.

He was of the opinion that Pakistan and Rwanda could enhance the trade volume by trading in agricultural products. “Pakistan can also help Rwanda in the field of healthcare and can accommodate Rwanda in terms of medical tourism,” he added.