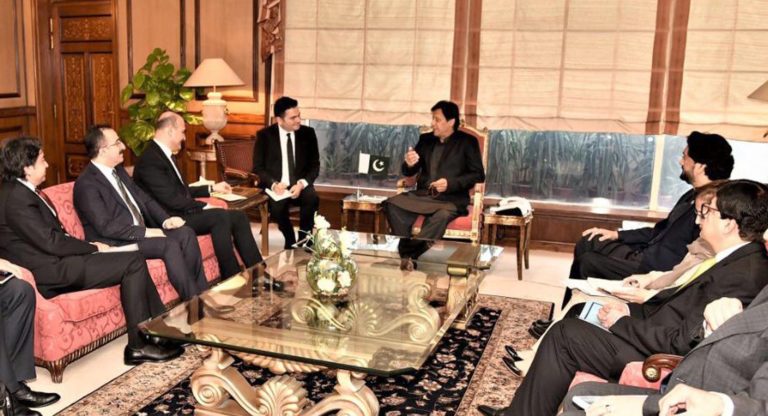 ISLAMABAD: Pakistan and Turkey on Monday agreed to expand bilateral cooperation at all levels for tracing properties of Pakistanis bought through money laundering and other illegal channels of money transfer, while also deciding to work in tandem to choke down terror-financing through all possible measures.

The agreement was reached during the meetings of Turkish Interior Minister Suleyman Soylu with Prime Minister Imran Khan and Minister of State for Interior Shehryar Khan Afridi separately.

“The dignitary, who is heading a high-level delegation to Pakistan, told the prime minister that Turkish President Recep Tayyip Erdogan would visit Pakistan next month along with his key cabinet ministers to take the bilateral cooperation between Pakistan and Turkey to the next level,” the source said. Turkish Interior Minister Suleyman Soylu also extended an invitation to Prime Minister Imran Khan to visit Turkey which was accepted by the prime minister,” the source added.

The source said that the premier expressed gratitude to the Turkish government for its continued support to Pakistan at all forums, especially the way Turkey had supported Pakistan during the recent voting on FATF grey-listing. The primer hoped that Turkey would keep supporting Pakistan in the future as well, the source added.

Pakistan also informed the Turkish guests of its initiative to counter terrorism and extremism in the country. Turkish interior minister offered to expand training and capacity-building facility for the Pakistani law enforcement agencies and the police. He also said that Turkey would also increase scholarships for Pakistani students in Turkish universities.

The interior minister also drew attention of the Turkish delegation towards the plight of around 31,000 illegal Pakistani migrants in Turkey and asked the Turkish government to redress this issue. He also informed that Pakistan had passed two major laws to curb human trafficking in 2018 which imposed major penalties on traffickers.

The source said that Pakistan offered Turkey online verification system through the National Database Registration Authority (NADRA) where Turkish authorities can verify the status of Pakistanis in real-time. This facility would largely help curb human trafficking, the source added.

An official handout quoted Shehryar Afridi as saying that Pakistan and Turkey enjoyed relations pivoted on historical, spiritual and religious grounds. He said the relations between Turkey and Pakistan will be further cemented to the extent that it will become exemplary for the whole international community.

The interior minister said that Pakistan’s Armed Forces have been valiantly fighting this war and they have defeated terrorists and cleaned each and every inch of Pakistani territory from terrorists.