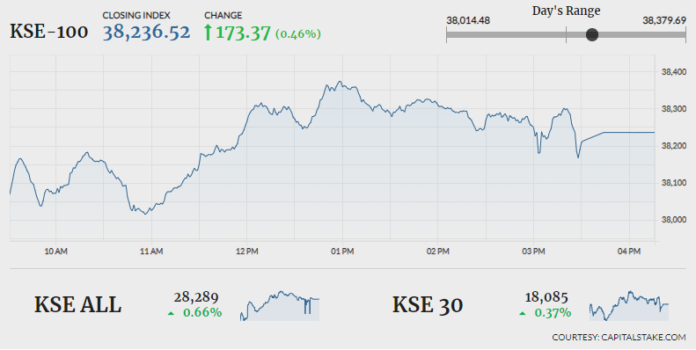 KARACHI: The Pakistan Stock Exchange (PSX) ended its three-day losing streak and closed the session in green on Thursday. Indices moved uphill as soon as the session began, but changed their path a few hours later and turned red. The indices then recovered their losses and continued to move north, finally ending the day on a positive note.

According to the latest data released by the State Bank of Pakistan (SBP) on Wednesday, Pakistan’s current account deficit rose to 3.46pc MoM to $1.255 billion in November from $1.213 billion in October.

Al-Abbas Sugar Mills Limited (AABS +5.00pc) touched its upper-circuit breaker after the company announced its results for financial year 2017-18. The company declared a final cash dividend of Rs50 per share in addition to Rs3.00 already paid. Sales surged up by 41pc YoY while earnings per share increased from Rs8.23 in the same period last year to Rs74.52 in the current year.