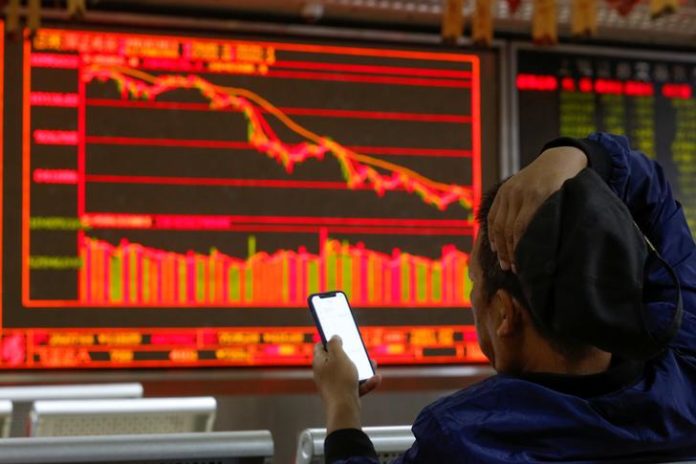 LONDON: Traders will be glad to see the back of 2018. Nearly $7 trillion has been wiped off world stocks, emerging markets have been trampled flat by a charging dollar and even gold and US government bonds have lost money.

A grisly combination of US-China trade tensions, central banks turning off the money taps and cooling growth in former hot spots has wiped 10 percent off MSCI’s 47-country world stocks index — its first double-digit loss in any year since the 2008 global financial crisis.

Add in a wild 35 percent plunge in oil prices since September, rises in Italian, Greek and now French borrowing costs that show eurozone worries remain alive, and a full-scale cryptocurrency collapse, and it has been unequivocally brutal.

“After 10 years of low-interest rates and quantitative easing I think we have to understand how some of this leverage in the market can unwind,” said Allianz Global Investors fund manager and global strategist Neil Dwane.

A fair bit of the year’s pain has stemmed from swift move up in US interest rates and a pumped-up dollar, which has had its best year in three years.

As a result, the euro, pound, Canadian and Aussie dollars and Swedish crown have all lost between 5 and 10 percent and though the Japanese yen comes out largely unscathed, emerging markets certainly haven’t.

Argentina’s peso and Turkey’s lira have slumped 50 and 30 percent, while India’s rupee,  South Africa’s rand, Brazil’s real and Russia’s rouble are all down between 10 to 15 percent. China’s yuan is in the red for a fourth year in five.

“And my concern going into next year is that the dollar will continue to strengthen.”

As well as the escalation in global trade tensions this year there has been the realization among investors that the big central banks aren’t thinking about stimulating the economy anymore — they’re trying to rebuild their arsenals in case of recession.

But the year hasn’t been a complete write-off everywhere.

While the S&P 500 and Dow Wall Street bellwethers are down the most since 2008, at around 5 percent their losses aren’t too bad, while the tech-heavy Nasdaq is clinging on for its 10th consecutive year of gains.

The FAANGs (Facebook, Amazon, Apple, Netflix and Google) have had rollercoaster year. As a group, they are ending 2018 worth roughly $2.8 trillion — more or less where they started it, but down some $800 billion or 24 percent from their late August peak.

There has been a big parting of the ways too. While Amazon and Netflix have surged 33 and 45 percent, repeated scandals over data misuse and fake news propagation have slashed 19 percent off Facebook shares.

Asia’s equivalent BAT group, made up of Badia, Alibaba and Tencent, have all down somewhere between 18 and 25 percent.

With China also the biggest consumer of industrial commodities, its misfiring economy has contributed to the respective 17 and 23 percent declines in the price of copper and zinc, used in things like pipes and galvanized steel.

The big cryptocollapse has seen Bitcoin crash 72 percent. There are now over 2,000 other digital currencies in circulation but their value has plummeted to $128 billion from over $800 billion in January.

But even traditional safe-havens have failed to provide much in the way of protection.

Italy’s government bonds meanwhile have plunged 9 percent after an anti-establishment government took charge in Rome and the European Central Bank confirmed its huge bond-buying program will end this year.

“The question as we look into 2019 and 2020 is how much worse the trade/tech cold war and Brexit get,” Allianz’s Dwayne said. “That could tells us that maybe we are not going to see a traditional downturn but a significant one.”