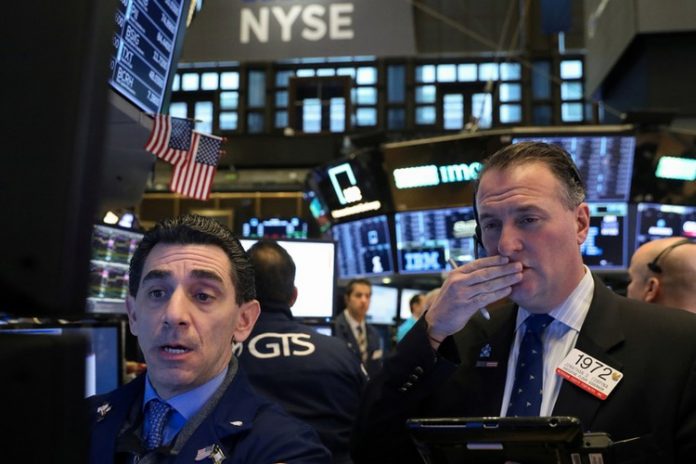 US stocks fell on Monday as weak forecasts from Caterpillar Inc and Nvidia Corp fueled worries about a slowdown in China taking a bigger bite off corporate profits.

Caterpillar was the biggest drag on the Dow and the S&P industrials index, which dropped 1.3pc.

Nvidia tumbled 12.2pc after the chipmaker cut its fourth-quarter revenue estimate by half a billion dollars on weak demand for its gaming chips in China and lower-than-expected datacenter sales.

Nvidia pulled down the Philadelphia semiconductor index by 1.7pc, while the S&P technology index dropped 1.8pc.

“The negative forecasts from Caterpillar and Nvidia point to those areas of concerns with trade, global economic activity and the potential impact of a strong dollar,” said Eric Wiegand, senior portfolio manager at US Bank Wealth Management.

As signs of a slowdown in the world’s second-largest economy become stark, investors are pinning their hopes for a compromise between Washington and Beijing on trade when officials meet later this week.

“This is a week for investors to either move off their Christmas Eve lows or move lower. What we are getting is a merge of macros and micros. But right now, these micros, which are company specific issues, is what investors seem to be dealing with,” said Wiegand.

The downbeat corporate updates came in an earnings-heavy week that also includes the Federal Reserve’s first policy meeting this year and jobs data.

Although earnings have largely surpassed Wall Street’s expectations, helping the S&P 500 climb about 12 percent from its December lows, worries about slowing global growth have tempered expectations and put a lid on stocks.

Of the 113 S&P 500 components that have reported so far, 72.6 percent have beaten profit estimates, according to IBES data from Refinitiv.

Since the earnings kicked off two weeks ago, analysts’ estimates for fourth-quarter profit growth have stayed steady at about 14 percent, but expectations for 2019 earnings growth has dropped to 5.6 percent from 6.3 percent.

Ten of the 11 major S&P sectors were lower. Amazon.com Inc, Apple Inc and Microsoft Corp — all set to report later this week — were down more than 2 percent, dragging down the S&P 500 and the Nasdaq.

The S&P energy index dropped 1.4 percent as oil prices fell more than 2 percent after U.S. companies added rigs for the first time this year, a signal that crude output may rise further.