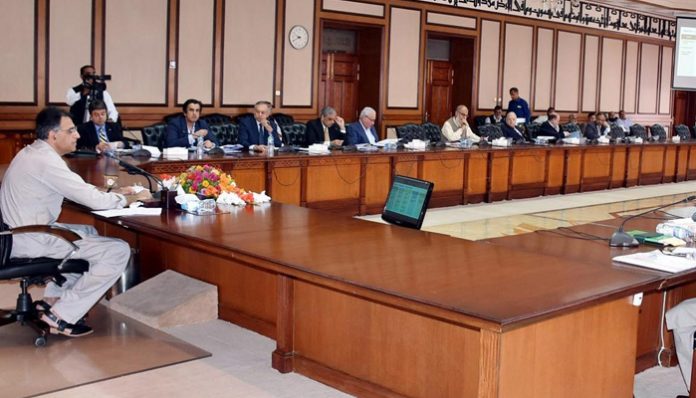 ISLAMABAD: The Economic Coordination Committee on Monday directed the power and petroleum divisions to devise a plan within 30 days to ensure the provision of electricity and gas facilities to the Special Economic Zones under the China Pakistan Economic Corridor (CPEC).

During the meeting, chaired by Finance Minister Asad Umar in Islamabad, Prime Minister’s Adviser on Commerce Abdul Razak Dawood and top officials from the Board of Investment gave a detailed briefing on the progress regarding Special Economic Zones (SEZs). The meeting was informed that there are a number of administrative hurdles and challenges to ensure the commencement of work in these special zones.

After detailed deliberations, the power and petroleum divisions were asked to submit a plan to the ECC within the next 30 days regarding electricity and gas requirements of the SEZs.

The ECC was informed that the government has planned to establish nine SEZs in all four provinces, and Gilgit Baltistan under the framework of the CPEC. Three economic zones will be established at three different locations during the first phase; Rashakai in Khyber Pakhtunkhwa, M3 Faisalabad in Punjab and Dhabeji near Karachi in Sindh.

The committee also approved Rs833 million to pay the salaries and retirement benefits of the people working for the Pakistan Machine Tool Factory (PMTF). The said amount was approved to help implement the revival plan of the organisation.

It is pertinent to mention that a proposal was submitted to the ECC, seeking approval of Rs737 million with regard to the retirement benefit of PMTF employees as a grant, while the remaining Rs96 million for salaries as a loan.

According to sources, ECC had sought a strategy in its next meeting on how the entity, which was facing losses and remained on the privatisation list for quite some time, would be revitalised.

As per documents, the ministry stated that since 2007-08, PMTF has been accumulating losses mainly due to non-diversification of products and therefore has a narrow customer base. Additionally, the PMTF was also on the privatisation list and the banks did not extend the credit limit, thus affecting its supply chain. Resultantly, it failed to settle the dues of retired employees.

A summary was moved to ECC in April 2018 for grant/loan of Rs823 million for payment of outstanding dues to 661 employees, who retired between December 2008 and December 2017. However, only Rs300 million were approved.

There were 321 retired employees who remained unpaid due to insufficient release while some of them moved to court. The Sindh High Court on September 4, 2018, deemed the partial release “highly discriminatory” and ordered that the secretary complete the exercise in this regard within 90 days.

The ECC was told that exigency to settle the dues of 321 retirees, who remained unpaid while their colleagues going through identical circumstances were paid, was imminent. In addition, the committee was informed that PMTF currently requires an amount of Rs833 million in total to facilitate the employees. Out of the total outstanding dues, an amount of Rs523 million was required to pay retirement benefits of leftover employees between 2008-2017, Rs214 million for employees retiring in 2018, and Rs96 million to pay the salaries from September to November 2018.