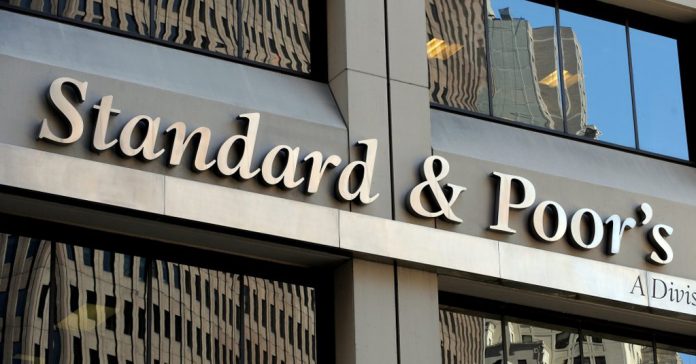 LAHORE: S&P Global Ratings has downgraded Pakistan’s long-term foreign currency debt rating from B to B- and maintained a stable outlook for its long-term rating.

However, the rating agency affirmed the short-term sovereign and issue rating at B and long-term issue rating on senior unsecured debt and sukuk trust certificates down one notch to ‘B-‘ from ‘B’.

S&P stated that its stable outlook for Pakistan reflected its anticipation that Pakistan had sufficient financing to meet its external financing requirements over the next twelve months,

It projected that neither external nor fiscal metrics will worsen beyond their current forecasts.

Also, prolonged talks with the International Monetary Fund (IMF) hint that any resulting reforms, whether under the program or contrarily will be less advantageous than previously hoped.

In an emailed response to Profit, IIF Senior Research analyst Boban Markovic said, “The S&P downgrade is not a surprise. Putting this in a broader context, S&P just levelled its Pakistan rating (B-) with the other major rating agencies Moody’s (B3) and Fitch (B-).

One should not expect to see significant shifts in the investors’ views of the country given that S&P’s rating of Pakistan is already below an investment grade and it matches the view of the other rating agencies,” he added.

“Pakistan has $1 billion Eurobond maturing in April, and it is unlikely that authorities will reissue a new Eurobond to cover the maturing one.

The environment is not suitable for such a move as the cost of Pakistan’s debt is high at the moment. Funding will have to come from bank loans or one of the friendly countries,” he explained.

Highlighting the problems facing Pakistan, Mr Markovic said, “Going forward, the challenges for the country are the same as six months ago: reserves remain below two months of import coverage, the fiscal deficit is high, current account deficit is not shrinking as much as anticipated, and on top of everything inflation is picking up, while the growth prospects are moderating.

“A possible IMF program would send a positive signal to investors but also require deep and unpopular structural reforms.

However, even without the IMF program, the authorities have to show commitment to serious reforms in the order set the country on the path of sustainable growth and macroeconomic stability,” he stated.

The rating agency said fiscal consolidation will remain challenging as the economy slows due to a lack of growth drivers and as the stimulus from China-Pakistan Economic Corridor (CPEC) investment fades.

According to S&P, the country will benefit over the long-term due to the improvements associated with its infrastructure, however, this will be offset by elevated fiscal and external stresses over the coming few years.

The rating agency believes the current Pakistan Tehreek-e-Insaf (PTI) administration haven’t yet introduced measures that are enough to make a major improvement in the general government deficit.

It highlighted that additional measures are required to rein in a more meaningful fall in the fiscal deficit, notwithstanding the new budget measures the government introduced in October 2018 which will increase revenue from petroleum products and infrastructure development.

Talking about the mini-budget unveiled last month, S&P said it should be marginally supportive of the economy, however, is unlikely to have a major impact on fiscal imbalances.

In contrast to their previous expectations, S&P believes the likelihood for a broader stabilization of Pakistan’s credit metrics has shrunk.

And Pakistan’s rating remains constrained due to a narrow tax base, but domestic and external security risks continue to remain high, it said.

S&P said Pakistan’s security situation has slowly improved over the last few years, however, existing susceptibilities are weakening the governments’ effectiveness and impact the business climate.

Pakistan needs to embrace hard-hitting economic and fiscal reforms to prevent a balance of payments and broader economic crisis and imbalances will remain heightened over the next two years, said S&P.

Pressure on the fiscal and external front remains said S&P due to a major rise in both fiscal and current account deficit in the last financial year 2017-18.

As per S&P, the financial package obtained from Saudi Arabia and United Arab Emirates (UAE) which includes the $3.2 billion deferred oil payments facility will assist in reducing external stresses and increase the State Bank of Pakistan’s limited foreign exchange reserves.

However, the rating agency said more needs to be done to stem this vulnerability over the medium-term, especially on export promotion and energy security front.

The annual real GDP growth is projected to average at 3.6% between 2019-2022 and the country’s per capita GDP is quite lower at around 1.5% because of a fast-growing population, said S&P.

Current account deficit is projected to narrow over the next two years with energy prices falling and the economy slowing, said the rating agency.

“Pakistan’s high degree of external stress is marked by a significant rise in the economy’s gross external financing needs relative to its current account receipts and useable reserves; we forecast this ratio will climb to 151.1% at the end of fiscal 2019, versus approximately 131% in the previous year,” said S&P.

It forecast Pakistan’s narrow net external debt to balloon to over 170% of current account receipts, from below 140% in the previous year.

Furthermore, change in net general government debt rose to 9.4% against 5.6% in FY17, due to the governments’ higher fiscal deficit and depreciation of the rupee.

Progress on the fiscal consolidation front as envisaged by the government will be diminished by political constraints and especially due to difficult economic conditions, said S&P.

“We forecast the average annual change in net general government debt at 5.9% of GDP through 2022, which is elevated versus our previous expectations.

Coupled with our lower expectations for real GDP growth, the forecast fiscal deficits will entail a gradual rise in net general government indebtedness toward just above 70% of GDP by the end of 2022,” said the rating agency.

Pakistan’s high level of interest expense remains an additional constraint on the government’s debt relative to its fiscal revenue and interest expense accounts for nearly a third of government revenue partially due to its narrow tax base, stated S&P.

Similarly, Pakistan’s interest-servicing burden will remain elevated, at an average of 32.4% of revenues, shared the rating agency.