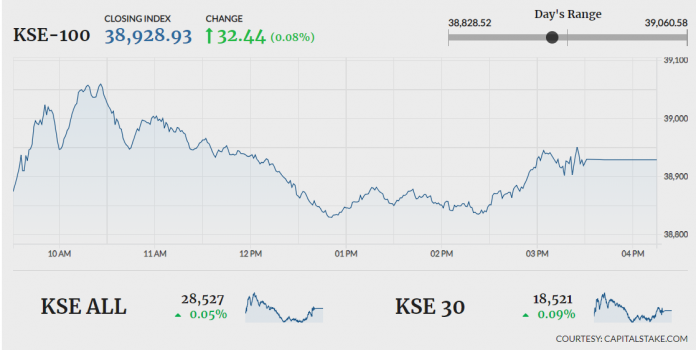 KARACHI: The Pakistan Stock Exchange (PSX) on Wednesday managed to close a jittery session in green. Foreign investors continued as net sellers on Tuesday with a net outflow of $0.381 million.

According to the latest data released by Pakistan Bureau of Statistics (PBS), Pakistan’s trade deficit declined by 11pc from July 2018 to February 2019. The deficit which stood at $24.2 billion in July-February FY18 shrank to $21.5 billion in the same period of FY19.

Moreover, United Arab Emirates deposited second tranche of $1 billion into the State Bank of Pakistan, as confirmed by the SBP spokesman. The loan was provided at an interest rate of 3pc.

The market volumes remained low and were recorded at 93.41 million. The Bank of Punjab (BOP +1.84pc) managed to maintain its position as volume leader with 23.73 million shares exchanging hands. Next in line were K-Electric Limited (KEL +0.33pc) and Unity Foods Limited (UNITY +8.22pc). The scripts had traded 8.07 million shares and 5.98 million shares respectively.

Packages Limited (PKGS -3.14pc) declared its financial performance for FY18. A final cash dividend of Rs15 per share was also announced by the company. Sales inched up by 16pc YoY, while earnings per share deteriorated from Rs69.05 last year to Rs29.69 in the current year. The company’s distribution cost increased by 27pc YoY, while its finance cost surged by 18pc.