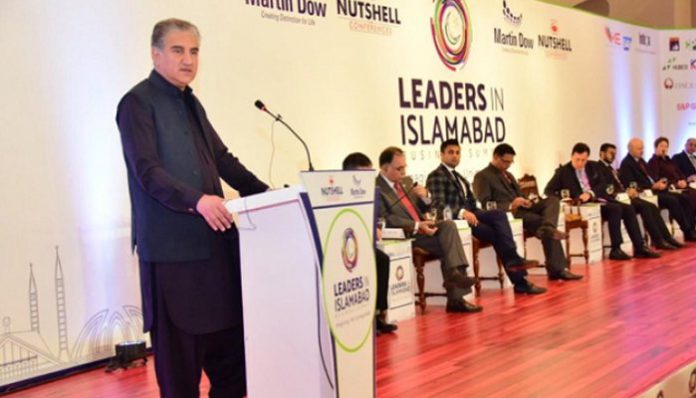 ISLAMABAD: Foreign Minister Shah Mehmood Qureshi has said that the Pakistan Tehreek-e-Insaf’s economic team, under the leadership of Finance Minister Asad Umar, has taken many steps to uplift the country’s economy during the first six months of governance.

Addressing the Business Leaders Summit in the federal capital on Wednesday, he said when Prime Minister Imran Khan ascended to power six months ago, he inherited a lot of challenges, including corruption and bad governance, which he had to overcome.

“PTI was elected on its agenda of change and the people will see a significant change by the end of the government’s tenure,” he added.

The foreign minister said the government is committed to creating investment opportunities in the country, adding that the government’s efforts in this regard have already started paying dividends.

“The United Arab Emirates is taking a keen interest in making heavy investments in different sectors of Pakistan while Qatar also plans to invest in the country’s food processing industry,” he stated.

Qureshi said the government envisions making Pakistan a hub of business and investment in the region. He thanked the European foreign ministers and parliamentarians for supporting Pakistan in securing GSP Plus facility for its exports.

“Our government is focusing on economic diplomacy, as we realise the value and potential of our geostrategic location. We are increasing bilateral trade with Iran, China and other countries of the region,” the foreign minister added.

China is Pakistan’s strategic partner and the government wants to transform this relationship into an economic partnership, he said, adding that the government is negotiating with China with regard to developing Pakistan’s agriculture sector and economic zones.

He said Pakistan wants peace in Afghanistan and the government is facilitating the peace process in the country.

Speaking about relations with India, he said Prime Minister Imran Khan, soon after assuming the charge, offered New Delhi a hand of friendship and asked for a foreign ministers’ meeting on the sidelines of UN General Assembly to resolve all outstanding issues between the two countries through dialogue.